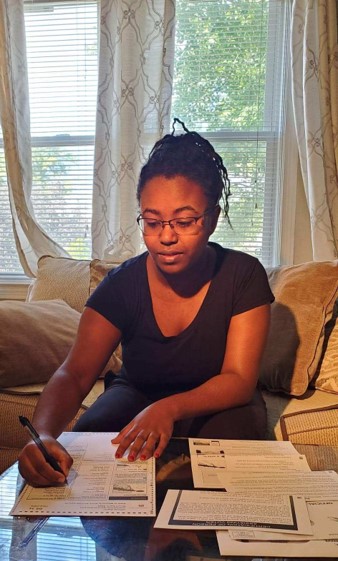 AACC students who are first-time voters said in October that voting is a civic duty.

Student voters told Campus Current everyone should have a say about who runs the country.

“If you want to make a difference, this is the best way to do it,” second-year computer science student Icram Doku said. “A lot of people go out and protest and everything, but the best way to make a change is to just vote.”

“Well, you know that is the American way,” political science professor Dan Nataf said. “And, you know, if you don’t vote, you’re part of the problem in the sense that you didn’t participate.”

Voters will elect either President Donald Trump, a Republican, or former Vice President Joe Biden, a Democrat, as president on Nov. 3.

“I think it is important to vote, just because if you live in a place you should have a say in who runs the place,” Cas Smith, a first-year business student, said.

Other students said everyone should vote because American is a country that allows it.

“Even if you vote undecided …[you] are still voicing your opinion,” Jacob Kay, a first-year emergency medical technician paramedic student, said. “That is a freedom that we’ve been given in this country where other countries don’t have that exact freedom. … That we still can vote is a freedom and a blessing and an opportunity that we shouldn’t be quick to write off.”

But art history and museum studies major David Sandoval said voting is not “a necessity.”

“But if you have the ability to, and you agree with one of the candidates, then I would strongly advise for someone to vote. But I don’t think anyone has to vote.”

“It’s not like it’s something you have got to do because you’re going to be tossed out of your house … if you don’t vote,” Nataf said. “And so, something’s got to tip you over.”

For some students, that “something” is the environment.

“I’m a big believer in climate change and everything,” Cruz said. “I really care about [it] … usually Republicans in general aren’t the biggest climate people, environment people. So that definitely sways me towards … voting Democrat.”

For other students, healthcare is the most important issue for this election.

“The cost of medical care is insane in this country so I would really like to see a candidate who cares about that and is looking for solutions,” Smith said.

Third-year communications student Amber Nathan said first-time voters should understand the reason why they support one candidate over another.

“I really think that voting should be a thoughtful task,” Nathan said. “I think a lot of college students unfortunately go into politics with a lot of emotion and they listen to a very liberal news media and they’re not really getting the full truth.”

“They definitely should do their research,” second-year business administration student Hannah Brown agreed. “They shouldn’t just go by what their parents say or what their family says. I definitely think everybody should have their own political view.”

Nathan, who said she plans to vote for Trump, agreed.

More important than whom they vote for, Kay said, is that students should vote.

“I know a lot of people aren’t voting because they don’t want to vote for the lesser of the two evils,” Kay said. “But I don’t think that’s a good excuse to give up your freedom to decide.”