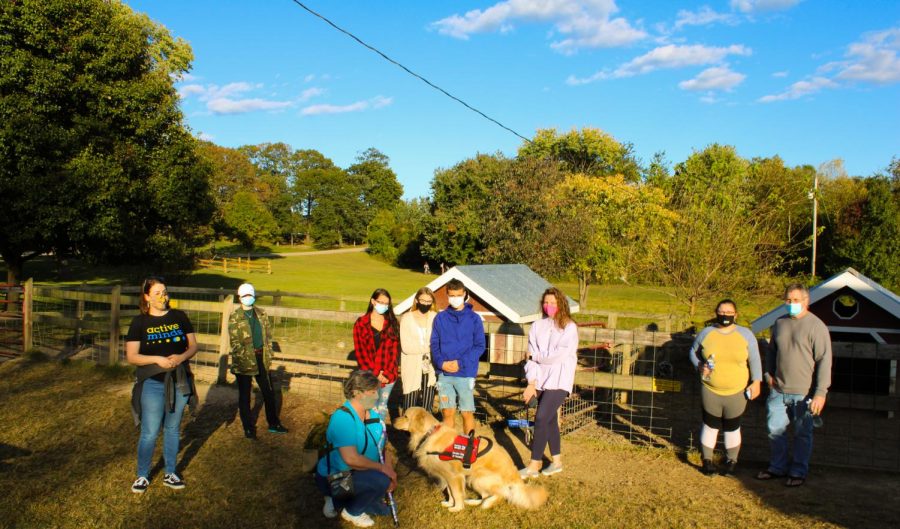 Six AACC students ventured out to Kinder Farm Park in rural Millersville on Oct. 8 to raise awareness for the American Society for Suicide Prevention.

The students included a mix of AACC’s Active Minds Club members and others who take classes with the co-advisers of the club, Dr. Denise Portis and adjunct instructor Juli Murray. The professors said they decided to visit the working farm because of the positive effect that animals can have on mental health.

“Our Out of the Darkness Walk … supports the American Foundation for Suicide Prevention,” said Murray, who teaches psychology. “Every year, Active Minds has made a team to support AFSP, which raises funds for suicide prevention and support for those that have lost someone to suicide. But we’re also a mental health club and human connection is important. Zoom is great, but being together is even better, right?”

“If you’ve never really been into getting outside and doing things before now, now it’s more important than ever,” she said.

The club is a chapter of the Active Minds national nonprofit organization, which supports education, research and advocacy about the mental health of students age 14-25.

Students who made the trip said they enjoyed being outdoors.

“I’ve been stuck in the house, so I thought it would be nice to come out,” said AACC student Emily Newcomb, who heard about the walk from one of her professors. “I didn’t realize there would be animals. I’m very excited about the animals.”

First–year transfer studies student Campbell Haney, who has class with Murray, said he was ready to get some time outside, too.

“I thought it’d be nice to get out of the house,” she said.

Kinder Farm Park is a 288-acre park that, in addition to the working farm, houses walking and biking trails, athletic fields, a playground and a community garden. The farm animals at the park are owned and cared for by the Kinder Farm Park 4-H Livestock Club.

“We were talking about what park we should go to, and Dr. Portis mentioned Kinder Farm and I was excited, because I’ve been here to check out the goats,” Murray said. “I actually didn’t even know there was stuff up here, and then she mentioned there were piglets. I was like, all right, well, now we have to go there.”