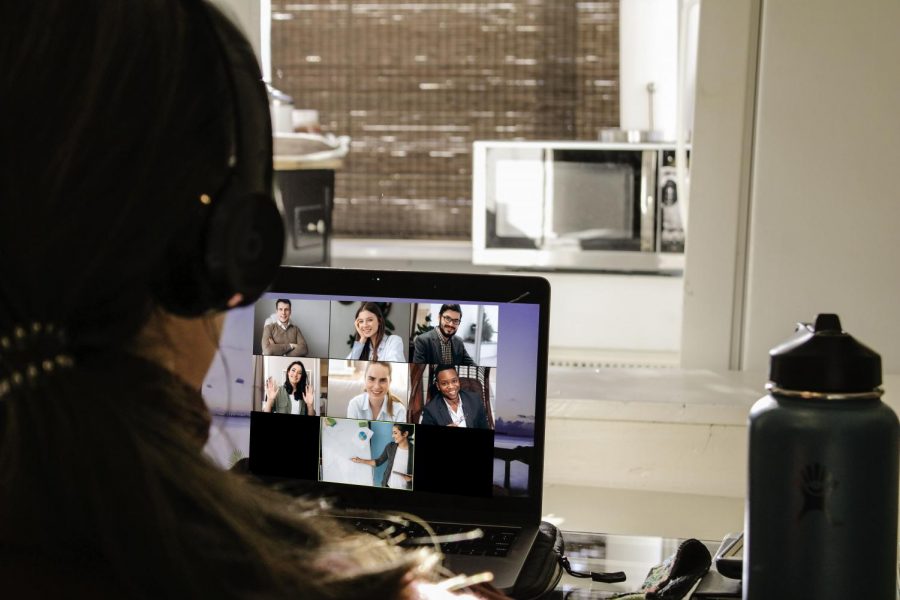 Just because you can do something doesn’t always mean you should.

And what professors say students should not do while attending a Zoom class meeting is show up without pants; cook dinner; vape; or lie on a bed.

Some professors have strict requirements about behavior during Zoom classes.

“We are in uncertain times, and we’ve been thrown into this digital world, and we’re making it up as we go along [so] etiquette is going to come out of that over time,” art professor Erik Dunham said.

Public speaking professors require students to dress up on days when they will make Zoom presentations. Others forbid students from wearing pajamas to class.

“I am pretty strict about appearance,” said Jaime Van Allen, coordinator of AACC’s licensed practical nurse program. “Don’t come to meetings wearing your pajamas. At least have your hair relatively brushed. Be presentable, like how you would go out to a grocery store.”

“Remember that when you’re in these Zoom classes, you’re also creating your brand,” she said.  “You are your brand, right?”

Students who “show up and you’re on time, if you show up and you’re participating, you look focused, your professor is going to remember you, and is going to want to write recommendations for you,” said Goldenberg, the interim director of the Entrepreneurial Studies Institute. “They’re going to want to support you and give you resources that are going to help you. They want to help everybody, but they’re going to know you better, because you’ve created that brand and that interest.

She added, “You make that effort, and you’re going to stand out.”

Students who mute their videos so their classmates and professor can’t see their faces are unlikely to stand out in that way. Plus, some professors say, it’s a distraction to them while they’re lecturing.

“The video feed isn’t a requirement, but I try to encourage all my students to have the video open, because that makes lecturing so much easier,” computer science professor Will Seabrook said.

During any kind of presentation, Seabrook said, it’s easier for a professor to gauge the audience’s interest and understanding if their faces are visible.

“You get a lot of information from watching people,” he said, “watching their actions, things like that. … I ask that, if possible, they attend class with video on so I can at least have some sense of speaking to someone rather than just a screen.”

“I think that it always looks better if someone turns their camera on and shows that they’re engaging in the class,” she said. “ “Sometimes I do turn my camera off … when I need to. But I think it’s rude. It’s better to engage and show your presence and mimic the behavior of an in-person class.”

Seabrook said he “totally … understand[s] that in this day and age, I’m sure a lot of people are attending class in pajamas, that’s fine too. So I don’t require” the camera to be on.

“Attendance is monitored,” Nataf said. “There is a grade that isn’t trivial, and attending a class isn’t just logging in to the video call. It’s trying to participate meaningfully in discussions. … If somebody’s camera is off or pointed somewhere else, I can’t see them. I don’t know what they’re doing. I certainly can’t see if their hands are up. And so, if you’re participating in a Zoom meeting, make sure that that you can be seen.”

“If you need to have your camera off, then have the camera off,” she said, “but participate in different ways so that … your professor or your classmates know that you’re interacting or have a question. Post something, so that even if you’re just a little square with your name, they know that you’re participating.”

Goldenberg suggests that students mute their microphones but keep the cameras turned on while “not distracting other students as best you can.”

Still, said professor Gina Finelli, academic chair of sociology, having too many rules can backfire.

“I think when you impose restrictions on people, they want to break the rules even more,” she said. Finelli said she believes in treating students “like adults” and doesn’t require them to have their cameras on during class. “To me it would be wrong,” she said. “It wouldn’t be considering the variety of circumstances in which a student could be taking an online class.”

“So,” he said, “the things that we would normally frown upon, the types of interruptions we would frown upon, like kids coming into the room, or the cat knocking things off of your desk while you’re in class. Those, you have to be more forgiving of those.”