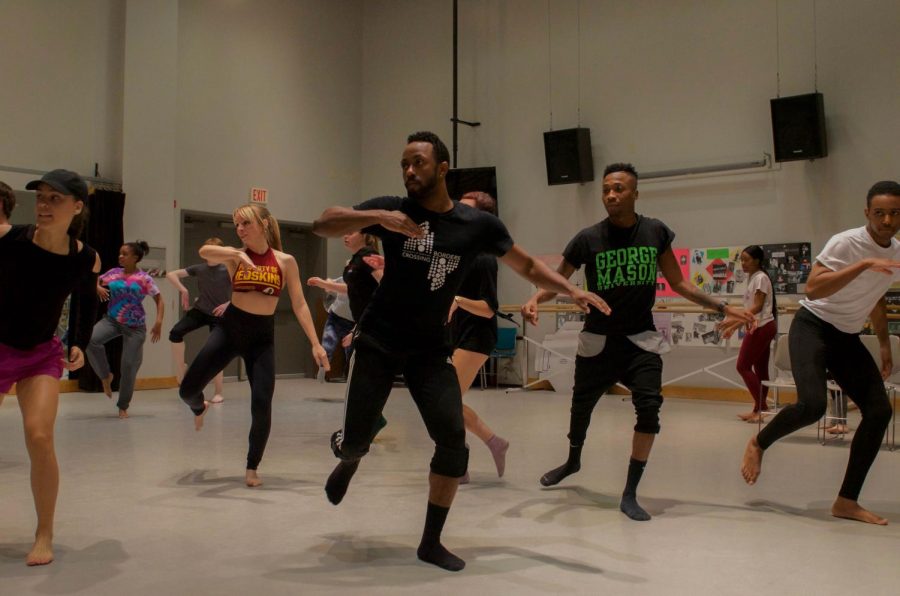 Students in performing arts classes are at greater risk of spreading coronavirus and catching COVID-19. Shown, an AACC Dance Company rehearsal from 2017.

AACC canceled all of its group dance classes this semester after officials deemed it unsafe to offer them on campus.

Tap dance, ballet, modern dance, jazz dance and dance production will likely return to the schedule next semester, according to Lynda Fitzgerald, the coordinator of dance and director of the AACC Dance Company. Instructors might teach them as hybrid classes—partly online and part

All other performing arts courses are online this semester.

“Because AACC places the health and safety of the college community first, it was decided that group dance classes posed a significant health risk to students and faculty, so they were canceled,” Dr. Alicia Morse, dean of liberal arts, said.

Fitzgerald said she tried to find a creative way to offer the classes online.

“It’s frustrating, but in all honesty, the measures needed to comply with CDC and world dance requirements are plentiful and still problematic,” Fitzgerald said, “so for now, it’s best this way, all things considered.”

The college initially had scheduled some performing arts classes to meet on campus this semester as it moved into Stage 2 of its reopening plan. Classes that are difficult to teach remotely, like nursing and other health sciences courses, are meeting at least once a week on the Arnold campus.

Culinary students also are taking some of their classes on the Glen Burnie campus.

But Ian Wardenski, the AACC performing arts chair who oversees music, theater and dance, said research has shown that students in performing arts classes generate a lot of aerosols and droplets, which can easily spread the COVID-19 virus.

News reports have shown that performers like singers, dancers, actors and musicians are at greater risk of spreading and catching the virus because they work in studio spaces that might not be well ventilated, they are prone to heavy breathing and they project more respiratory droplets that others can inhale.

“This pandemic has been fluid, so we have to be flexible,” said Dan Baum, executive director of strategic communications.

The college’s spring musical, “Beauty and the Beast”—already postponed last spring when the campus shut down and migrated all of its courses online—could show in April.

Still, Vince Musgrave, the musical’s director, said the 30 cast members are not yet able to rehearse in person.

“Putting [the cast] all in one room would be next to impossible the way that the standards are just by the CDC right now,” he said.

Actor Josiah Thompson, who is training as the understudy for the character of Gaston, said performing arts “is super interactive,” making it difficult to teach or learn online.

“Online learning for performing arts classes isn’t really teaching much because you have to be in person,” said Thomas, who graduated last fall with a degree in performing arts.

Wardenski, said some of the online performing arts classes require students to use the real-time audio application JamKazam, as well as the virtual platform Zoom.

Vice President for Learning Mike Gavin has estimated that as many as 3,000 students could return to campuses for classes this spring. Their presence on campus would be staggered throughout the day, Gavin said.