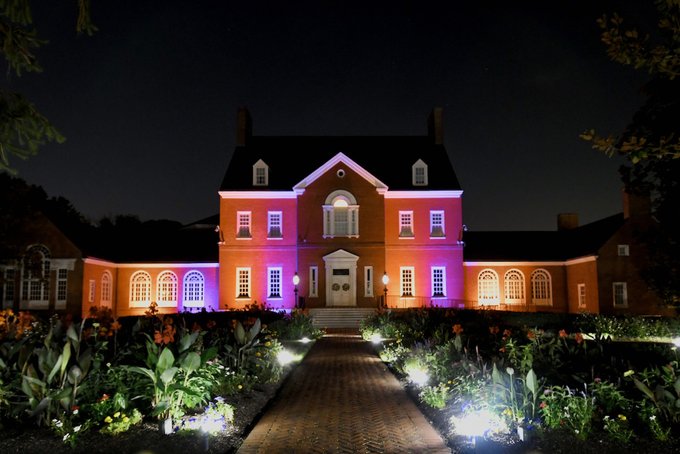 Courtesy of Executive Office of the governor

The home of Maryland Gov. Larry Hogan lit up in purple and gold on Wednesday night to celebrate the 100th anniversary of the signing of the 19th Amendment—thanks, in part, to the efforts of a few AACC students.

Purple and gold are the colors usually associated with the suffrage movement of the early 1900s. Government buildings around the country lit up in the historic colors on Wednesday.

The Peer Learning Partnership is a community of lifelong learners who take classes and organize cultural and social activities. Gren said she reached out to members of that community in an effort to bring the event to Annapolis.

“We’ve been handed the torch, so what are we going to do going forward?” Gren said. “Creativity and persistence get the job done.”

Gren said ultimately the request reached the first lady, who said “yes” to the lighting of the governor’s mansion from 8:45-10 p.m. on Wednesday.

Hogan told Campus Current she was proud to light her home in purple, which stands for loyalty, and gold, to signify hope, to honor the centennial anniversary of the amendment that granted women the right to vote.

“Maryland’s history has been shaped by so many extraordinary female leaders who have made incredible contributions to our state and our nation,” Hogan said. “As we begin the next 100 years of women’s suffrage, we remain firm in our commitment to empowering and advocating for all women.”