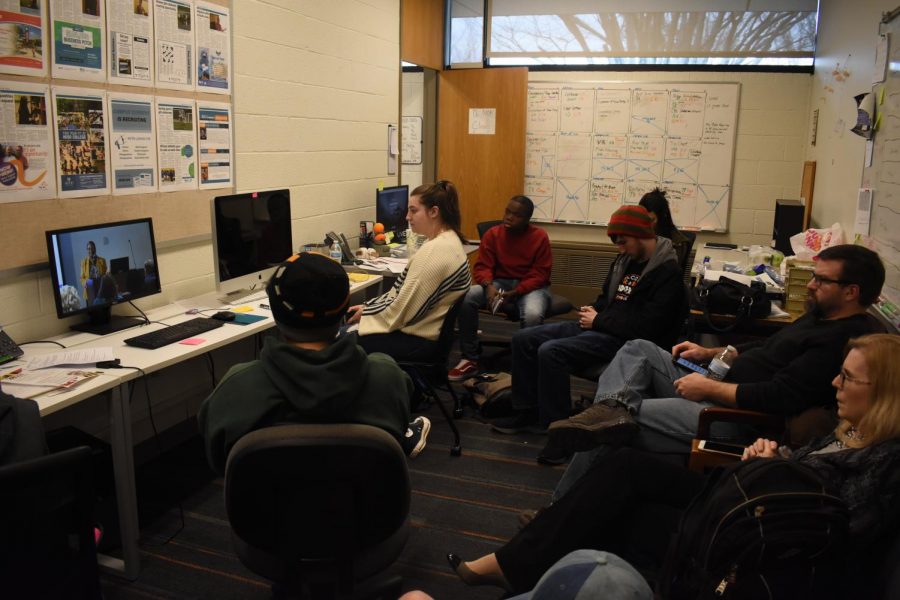 Campus Current staff sit and watch AACC's three vice presidents explain their coronavirus prevention plan, before deciding to suspend the publication of the print edition through the end of the semester.

Campus Current, AACC’s student newspaper, will suspend the publication of its monthly print edition starting April 1 and instead will publish online only through the end of the semester.

The editors decided this week they would not publish the April and May newspapers after college administrators announced on Wednesday that most face-to-face courses would convert to online classes after a two-week spring break that will end on March 29.

That announcement was a response to the rapid spread of the coronavirus, which the World Health Organization has declared a pandemic.

This is the first time Campus Current has published only in digital form. The editors said they intend to resume publication of the print edition once the campus returns to normal.

“We decided that it didn’t make a lot of sense to publish and distribute a print newspaper for students when there aren’t going to be any students on the campus,” professor Sharon O’Malley, Campus Current’s faculty adviser, said. “But they are going to be taking online classes and will be online a lot, and we want to continue publishing the paper, so this seems to be the logical thing to do.”

The staff was more than halfway finished with production of the April print edition before Wednesday’s announcement and will publish those stories online, according to Editor-in-Chief Christian Richey.

“I think it’s an interesting opportunity,” Richey said. “It’s kind of weird because obviously this is kind of unprecedented for us. But I think it’s going to be interesting.”

Richey, a third-year journalism student, said covering a campus whose students mostly take remote classes will require more coordination than putting out a print edition that the staff could work on together in the Campus Current newsroom each month.

“It’s definitely a change of pace,” third-year transfer studies student Daniel Salomon said, who is coordinating the staff’s coverage of the campus response to the pandemic. “It’s definitely different and I don’t know if I’m excited, but I am definitely looking forward to seeing what happens.”

O’Malley stressed that Campus Current is not doing away with its print edition forever.

“This is temporary during this coronavirus precaution on campus and once we are back on campus in classrooms, we will resume a printed newspaper,” O’Malley said.