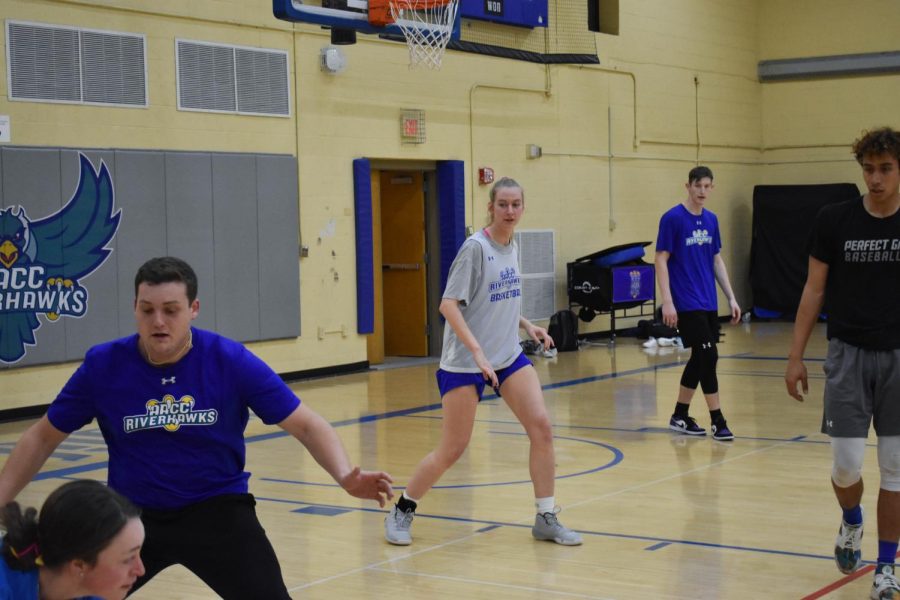 A Women’s Basketball center averaged 14.7 points and 17.3 rebounds this season, including eight straight games with double-doubles.

Sarah Healy, a second-year transfer studies student, said the streak was “very impressive. I had it [and] then I lost it. But I’m going to get it back again, so I’m not too pressed.”

Healy is “a good kid,” Makell said, “the type you build your program [around].”

Healy’s eight-game double-double streak included a game Dec. 19 against Hocking College, during which she scored 20 points and had 31 rebounds, including 21 offensive rebounds.

Healy said her teammates thought the streak “was like my baby because I got it up so high.”

The team ended its regular season as a No. 2 seed in the National Junior College Athletic Association Region 20 Tournament.

The Riverhawks fell 74-60 to No. 1 seed Prince George’s Community College during the tournament.

Women’s Basketball players said Healy is a good teammate on and off the court.

“She basically leads us in rebounds and most of the points, which we really need this year,” forward/guard Autumn Foster-Fields, a third-year sports management student, said. “And she has a great attitude, on and off the court.”

“Sarah’s my study buddy and my best friend,” Hinkle said. “She continues to put in an effort and she’s a beast on the block for us and our team.”

Makell said Healy has the potential to join a top four-year basketball program.

“You know I know her potential and her upside [with] just the progress she’s made in the last two years,” Makell said. “And then around the country, I found out most of the colleges are looking for rebounding. … She’s a naturally good rebounder.”