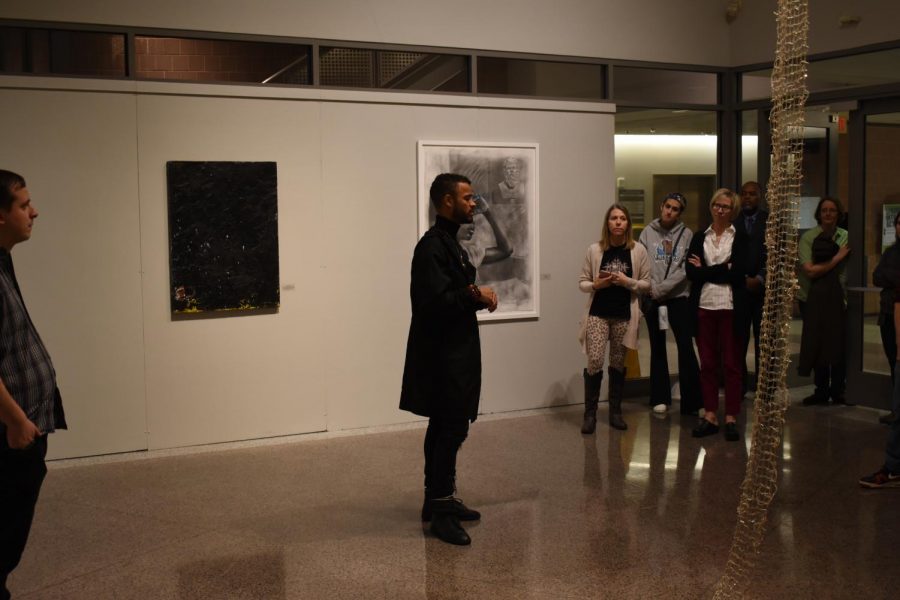 Curator Thomas James speaks to an audience of students and faculty about the art exhibit Grey Matter: A Response to Blackness, held in the Cade Gallery.

AACC hosted an art exhibit in celebration of Black History Month in the Cade Art Gallery on Wednesday.

Thomas James curated “Grey Matter: a response to blackness”, which hosted works from four artists who all focus on hardships in African-American history.

“I want people to come in here and just take a second to reflect on the work that’s being shown and the capacity in which it was created,” James said.

Some of the mediums included charcoal on paper, mixed media on tarp, and nails and rope.

“I’m like oh my gosh this is incredible; this is so detailed,” Samantha Kent, a second-year visual arts student said. “It’s just amazing–the technique, the style, the cross hatching–I just love it, it’s awesome.”

Jordan Lovett, a third-year transfer studies student said, “I think it’s very important actually, for everyone to see all of this. It’s all moving; it’s a very important message.”