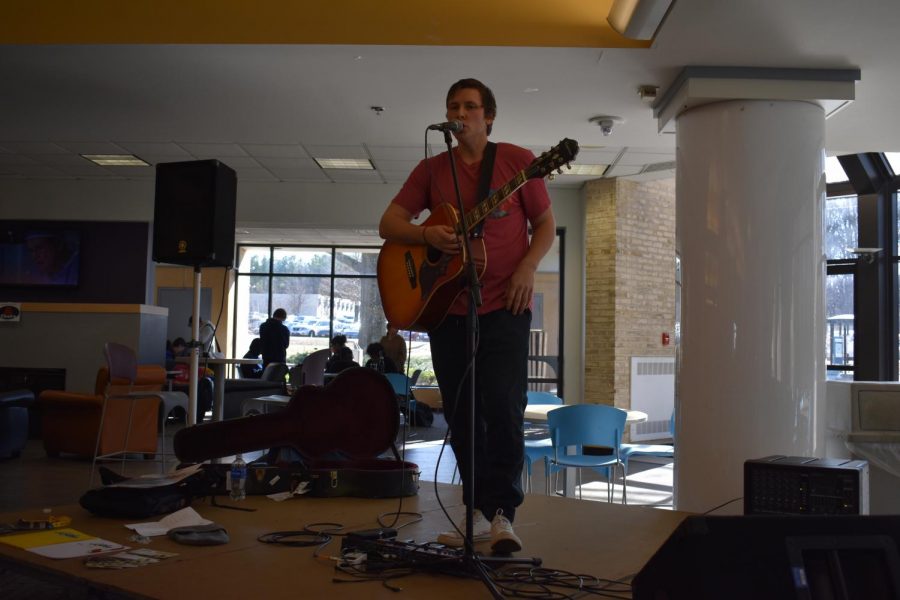 J8ke performs for students in the SUN Dining Hall.

The Campus Activities Board hosted a concert in the SUN Dining Hall on Wednesday featuring a singer-songwriter from Toronto, Canada.

“There are a lot of [recent songs] I put my own spin on,” J8ke said. “And a lot of covers from like the early millennium or even the 70s.”

“I also throw in some originals like my big song ‘Ricochet,’ which is my single,” J8ke said. “[It] is being played on Canadian radio stations.”

J8ke said he played for three bands prior to starting his solo project five years ago. Since then, he has looked for university and college bookings for interactive concerts.

During the interactive concert he encouraged the crowd to sing parts of the covers and suggest new songs for him to play, allowing the audience to participate.

“The concert was very interactive and was a really fun way for students to actually get to know the musician better,” Breia Cummings, a fourth-year business management student, said. ”I think this is one of the best ways to start the semester.”

J8ke asked audience members to post any recordings they took to their social media accounts. He also offered free posters and a mailing list for anyone who wanted to know when he would return.

“I think my favorite original was ‘Rendezvous,’” CAB member Will Kuethe, a fifth-year music student, said. “He played a lot of good songs [and] a lot of the students liked it. There are a lot of people who signed up for his mailing list and took autographs.”

Kuethe said CAB intends to host another concert by J8ke in the future.