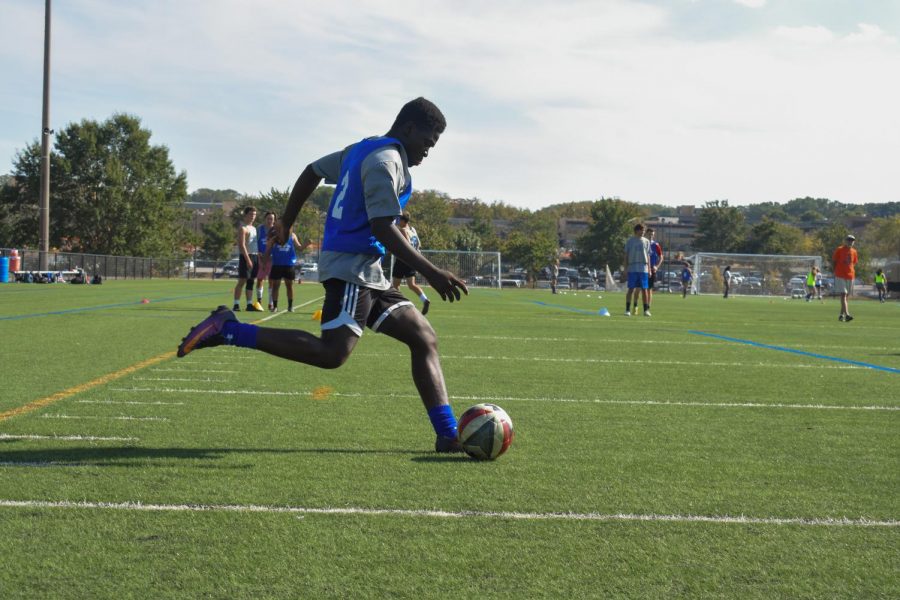 First-year legal studies student Victor Mmandama from the Democratic Republic of Congo joins Men’s Soccer this semester, along with Joba Malomo from Ghana and Ousman Leigh from Ontario.

AACC Men’s Soccer added defensemen from Ontario and the Democratic Republic of the Congo, and a midfielder from Ghana to its roster this year.
First-year computer engineering student Joba Malomo from Ghana moved to Ellicott City over the summer. He enrolled at AACC this semester.
However, Malomo said he didn’t come to AACC just for soccer. Malomo said he wanted “to seek a higher education [and] try to get my associate’s and bachelor’s degree.”
Malomo said he joined the team because “a friend of my auntie knew [the] coach and he talked about how AACC had a great soccer program. So I thought, why not?”
First-year legal studies student Victor Mmandama from the Congo has lived in Lansdowne near Baltimore since 2016, and after enrolling at AACC, he decided to try out for the soccer team.
“The team is family,” Mmandama said. “We have our own special communication. We are a family and we consider each other as brothers.”
Head soccer coach Nick Cosentino said the three players are reliable.
“First of all, they’re great practice players,” Cosentino said. “They play hard every day; they come to practice every day; they’re on time and they’re well-mannered, good students.”
Cosentino said the team has potential even though it is a work in progress.
“We have areas where we definitely need to improve on, and it’s a process,” Cosentino added.
The third international athlete who plays on Men’s Soccer is Ousman Leigh, a first-year engineering student from Ontario, who joined the team as a defenseman in October.