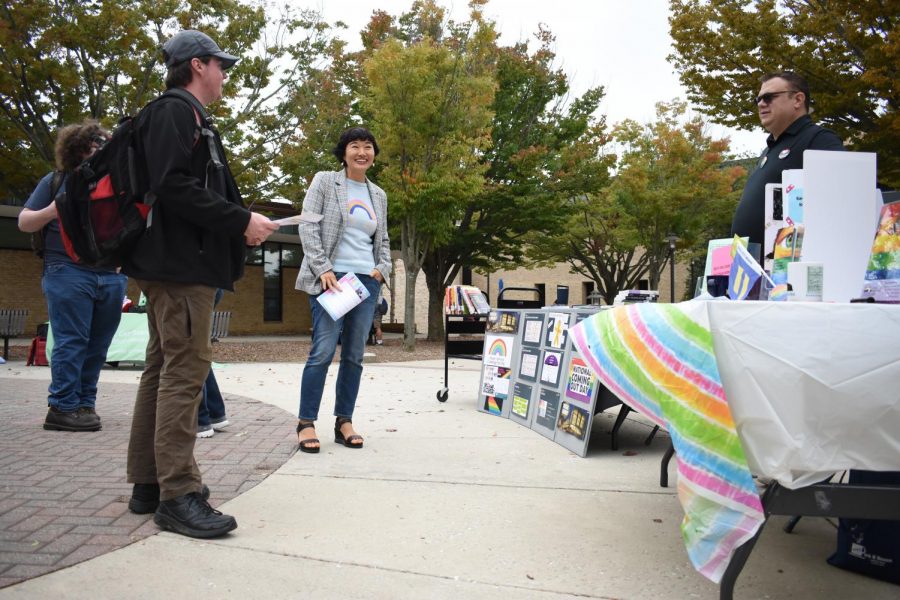 Professor Mea Lee (left) and Dr. Richard Otten were among those representing organizations at the Coming Out Fair.

AACC faculty and students celebrated diversity and inclusion Thursday during the Coming Out Fair.

The fair served to commemorate LGBT pride and diversity, according to Dr. Richard Otten, the fair organizer.

Otten, an adjunct instructor, said the fair is meant “to promote diversity and inclusion of LGBT+ issues and education to bring people from different aspects of the college together.”

Otten said the fair coincides with Coming Out Week, an event featuring activities held by numerous organizations on campus.

The fair included stands from the AACC Rainbow Network, Truxal Library, the campus health department, and Annapolis Pride, according to Otten.

Speaking on pride, Otten said it celebrates “the diversity of life.”

Pride is “about people being able to be themselves,” Otten said. “[It’s] about the constant progress of not just acknowledging that some people are gay, but of promoting non-binary thinking, of how artificial binaries tend to limit our human expression and … being proud to not be normal, or conversely that normal is a broad spectrum.”