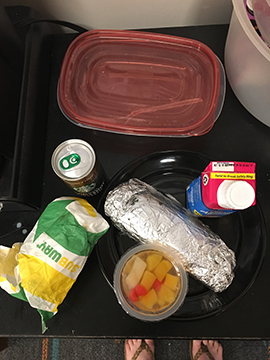 Students say they are just as inclined to bring a lunch as they are to buy one.

AACC students are just as likely to bring lunch from home as they are to buy food on campus, according to a Campus Current poll.

In an informal poll of 25 students on campus, nine said they bring their food from home, eight buy their lunch on campus, five purchase meals off campus and three said they wait until they get home to eat.

“I can just customize [my lunch],” said Savannah Nielsen, a second-year transfer studies student. “I know what I want, just bring it and I don’t have to spend money at school.”

An article in the British Journal of Health Psychology said eating fruit and vegetables increases curiosity and creativity.

“I usually go to Chick-fil-A [on campus] and grab a salad,” Pelletier said. “I like to eat more healthy; it makes me feel better and gives me more energy in my day.”

Daniel Hethmon, a second-year engineering student, said he finds healthy options at the hot bar in The Hawk’s Nest Grill and Deli.

“I want to eat a high-protein healthy lunch so the cafeteria [has] the best [options] for that,” Hethmon said.

But other students said they wait until they get home or go off campus to eat.

“I do not do lunch at AACC,” said Jacob Moyer, a third-year criminal justice student. “I feel more comfortable eating at home.”

Moyer said he typically eats either a burger or a hot dog for lunch.

Others, like second-year nursing students Ashley Sanders and Amanda Lapsley, said they go to the Chick-fil-A off campus in the Severna Park Marketplace because the campus store sometimes runs out of sandwiches by 1 p.m.

“Every time I go there’s like no sandwiches,” Lapsley said. “I’m not kidding, and [Ashley] likes the fries.” The on-campus Chick-fil-A doesn’t serve the chain’s popular waffle fries.

Katie Gamboa said she wants snacks that are quieter to open. Typical snacks from the vending machines come in plastic wrappers that are noisy to tear open.

“Most of them [are in] loud bags,” said Gamboa, a first-year nursing student who eats during class. “In lectures, professors get annoyed with loud stuff.”