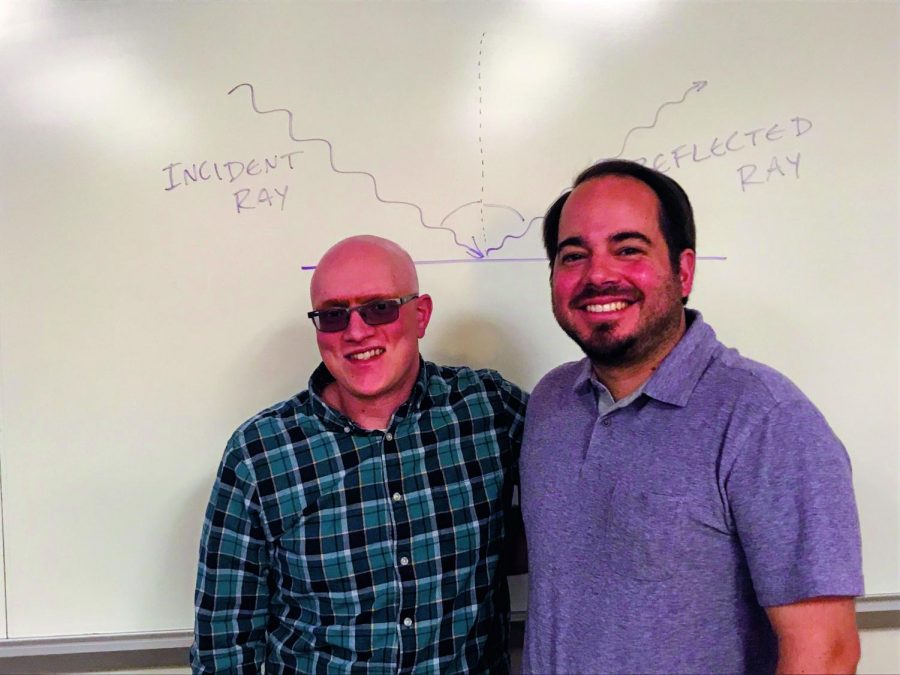 Physical Science 285 will cover climate change, the effects and the organizations working to mitigate it.

“The atmospheric changes in climate, what fossil fuels are doing to the atmosphere and temperatures” are some topics Santorelli said the professors will cover in the first portion of the course.

Santorelli said he will use his expertise in weather to teach how scientists forecast changes in temperature.

“Climate change is one of the greatest threats to the planet,” she said. “I’m very happy to hear our college will be educating students on this issue.”

The professors said the class will go beyond the science aspects of climate change and will cover its impact on the economy and society.

“The last portion of class will go over mitigation efforts to stop climate change, like climate agreements,” Miller said.

Both Miller and Santorelli, who describe themselves as “best buds,” say the class will include lots of dad humor.

Santorelli also said it is important to him to teach students how to find accurate journalism on climate change.

He said the public has trouble finding reputable sources for information on what’s really going on.

“Sometimes we’ll have some days in winter where it gets really cold, so some people then think and then read that climate change is getting better, which isn’t true,” Santorelli said.

Miller said the class could benefit every student, no matter the major, because “climate change is affecting us all.”

But he particularly suggested that history, political science and communication students should sign up because the topic could relate to their future careers.

Miller said the issue of climate change is a personal one for him.

“I have a daughter, so it is a personal topic,” Miller said. “I’ve always sort of been interested in environmental issues but this one is big and it’s serious and it’s going to impact my kid significantly.”

He added, “There are already things happening that are irreversible and species are becoming extinct.”

Both professors said AACC students can notice significant weather fluctuations as a result of climate change.

In Maryland, Miller said students can notice warmer winters and wetter seasons, which are harmful to the environment.

Santorelli said this winter, which had a polar vortex, was extremely concerning. A polar vortex brings cold air to specific regions.

Both professors said they hope students will learn that climate change is a huge, serious problem but the silver lining to it all … is that humans are totally capable to mitigating it,” Miller said. “We just need to do something about it.”