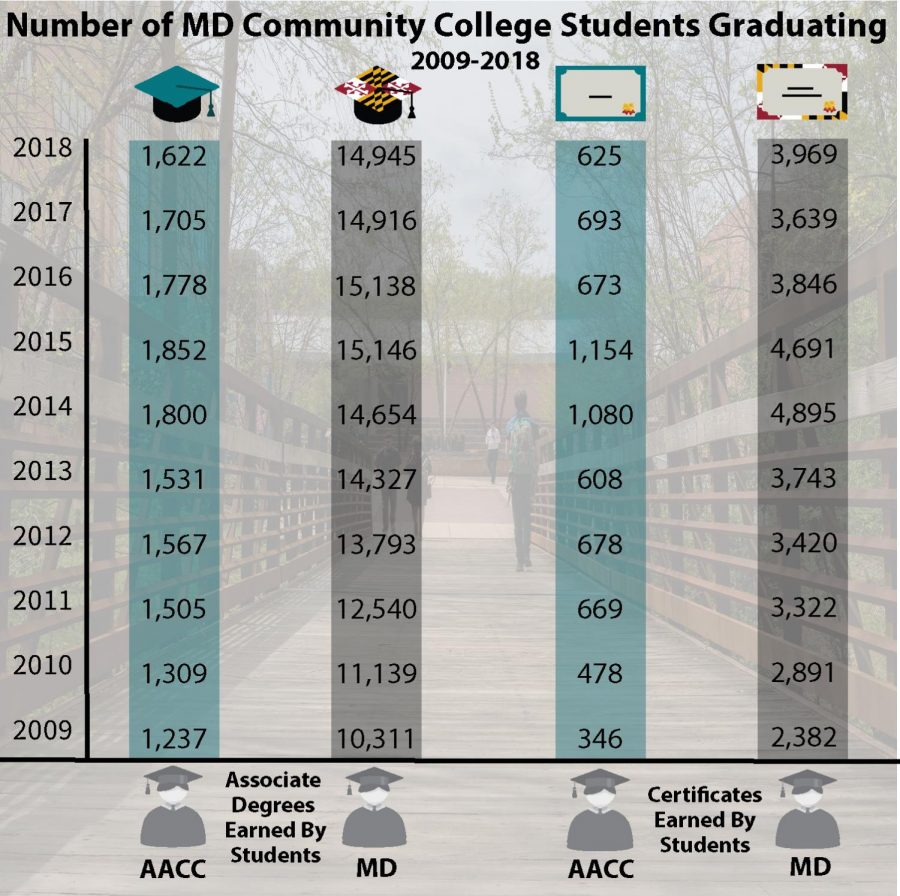 Graduation rates increased steadily early in the decade before decreasing gradually since 2016.

Among Maryland’s 16 community colleges, AACC ranks third in the number of associate degrees it awards each year.

“We’re near Montgomery and CCBC in the number of completions, but we’re significantly lower than them in terms of enrollment,” he said.

According to the Maryland Association of Community Colleges, AACC awarded 1,622 associate degrees in 2018, while Montgomery College gave out 2,578 and CCBC granted 2,131.

In addition, AACC awarded the second highest number of certificates in 2018 compared with the other community colleges, according to MACC.

“I believe it is the commitment to academic excellence, our faculty performing well in the classroom … working for the benefit of all students,” Gavin said.

“With each strategic plan, we have placed greater and greater emphasis on those strategies that can improve student success so more students can achieve their educational goals,” he said.

The number of students graduating from AACC increased every year from 2009 to 2015, hitting a peak in 2015, with 1,852 associate degree graduates and 1,154 earning their certificates.

In 2016, the number of graduates at AACC, along with all other Maryland community colleges, started declining.

“Our enrollment dipped with the stronger economy, and so our completion rates over time have as well,” Gavin said.

Phillips said community college enrollment has declined statewide since 2016 because of a healthier statewide and nationwide economy.

He said another reason for lower graduation numbers is a trend among students to transfer to four-year colleges sooner instead of waiting to graduate from community colleges.

Still, Gavin said, the number of students who are graduating after three years at AACC has risen by 5 percent over three years.

In 2016, AACC awarded 1,778 graduates with associate degrees and 673 students with certificates, according to MACC.

By 2018, those numbers dropped to 1,622 associate degree graduates and 625 who earned certificates.

Baum said AACC’s plan is to encourage students to complete their degrees at the college.