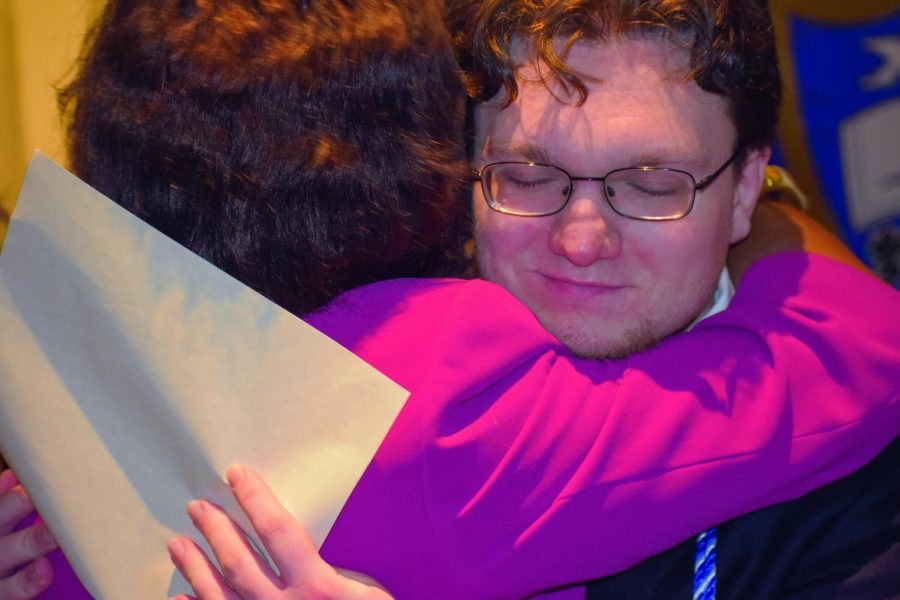 Third-year student Daniel Aha is one of 41 students whom college officials inducted into Chi Alpha Epsilon, for students who started in non-credit classes and now have a 3.0 grade point average or better.

Their shoulders draped in blue and white tassels, 41 students formed a long line and walked proudly down the aisle of Cade 219 to receive pins of honor from esteemed faculty of the college.

But when they started at AACC, these students walked down the aisles of classrooms for  non-credit courses.

As official members of the college’s Chi Alpha Epsilon, Epsilon Chi chapter, each of the students honored at the ceremony started AACC in those courses and have earned grade-point averages of at least 3.0.

“We provided an opportunity, but you did the work,” Dean Alicia Morse of the School of Liberal Arts told students during her speech at the ceremony. “Study hard, work hard and don’t forget to play hard.”

After 11 years, AACC has inducted 525 students into the honor society.

“Your educational journey is transformative,” Dean of Student Engagement Tiffany Boykin, who delivered a speech at the event, said. “This is really just the beginning if you choose it to be.”

Student inductees agreed that this is just the start of their success.

“I love AACC because it brought my confidence up,” Mathews said. “I was never the smart kid.”

The honor society has 170 chapters across the nation.