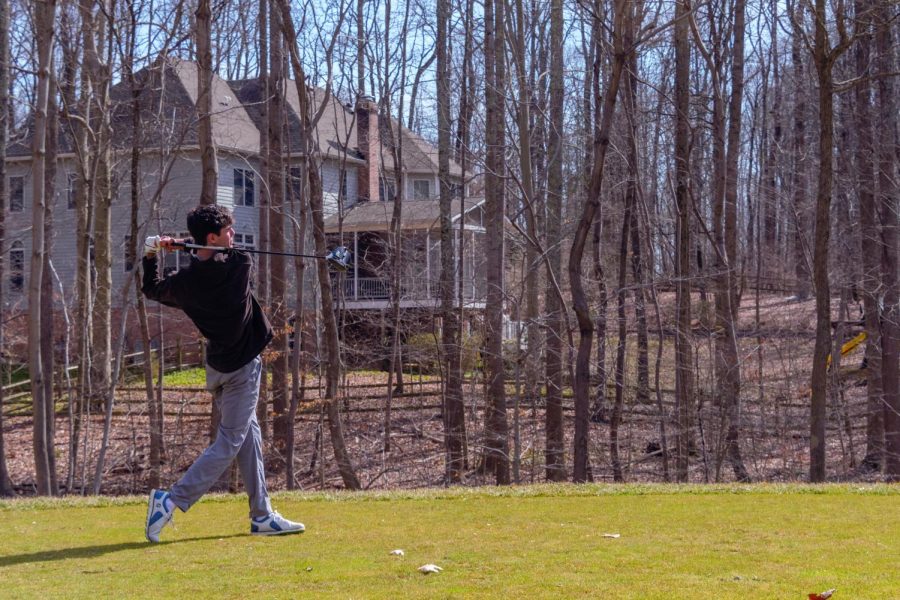 Luke Schwartz, a golfer and first-year business administration student, led Riverhawks Golf this season with a fourth-place finish in a match at Hagerstown.

Riverhawks’ spring sports kicked off the 2019 season on Feb. 9 with a Men’s Lacrosse scrimmage against Army Prep.

Since then, Women’s Lacrosse, Baseball, Softball and Golf began their seasons in the weeks following.

As the season has progressed, AACC athletes have stepped up to the plate and supported their teams in both victories and losses.

On this page, we recognize Riverhawks who have soared above and beyond on the field and have made a noticeable impact on their spring teams this season with outstanding stats.

Caden Cote, a first-year business administration student and midfielder, has led Riverhawks Men’s Lacrosse this season with 17 goals and 20 assists.

Cote started playing lacrosse when he was 6 years old and played throughout his life. More recently, he played on the Varsity Men’s Lacrosse team at Old Mill High School before coming to AACC.

He said the biggest difference between varsity high school and NJCAA lacrosse is the level of play and intensity.

“I think the speed and the skill level of the players have gotten noticeably better since I played in high school,” Cote said.

Cote said his team has worked on shooting almost every day and is adamant about keeping practices focused.

“We keep everything high pace and high intensity so we can keep the competition up,” he said. “It helps me translate what I’m doing in practice right into games.”

Cote said his favorite game of the season so far was against Naval Academy Prep. Although the Riverhawks lost the game, Cote said, losses are a great way for a team to learn and grow together.

“It was a good experience just recollecting ourselves, and then the next game we actually beat Essex at home which was kind of like, ‘OK, we know where were at now and we can compete with these top five teams in the nation.’”

Cote said he attributes most of his success on the field to the bonds he has with his teammates.

“It’s a great group of guys and I love hanging out with them every day,” Cote said. “Everyone’s really encouraging to each other and trying to get the best out of each and every one of us every day. … It’s a good atmosphere to be in and it creates a lot of high-competition situations, which is good.”

Frye started playing tee-ball when she was 5 years old. She continued to play club softball while growing up and made the softball team at Glen Burnie High School before coming to AACC.

Frye said she goes to batting cages outside of practice to keep improving her hitting skills.

She said the team has worked specifically on hitting and fielding this season.

“I think we’ve definitely improved from our first game and came a long way as a team,” she said.

Frye’s assistant coach, Brittany Nunez, agreed the team has progressed with hitting throughout the season.

“They struggled a lot in the beginning … but now they’ve each individually been improving substantially it’s been really impressive to watch,” Nunez said.

Drew Ehrlich, a second-year transfer studies student, has led Riverhawks Baseball this season with 23 runs, 25 hits and 19 runs batted in.

Ehrlich started playing baseball when he was 6.

Although the Riverhawks are having a rocky season, Ehrlich said, the team has come a long way with learning to play together successfully.

“We’ve lost a lot of close games, but I think a lot of guys have come a long way in terms of finding their role and doing what they need to do to help the team win,” he said. “It’s just tough in the wins and losses column.”

Ehrlich added he works on his hitting and conditioning outside of practice to keep improving and work on his skills.

“I hit a lot during the week,” he said. “I hit outside of practice and I do a lot of working out and lifting … to keep in shape for baseball.”

Ehrlich said his favorite game of the season so far was against Cecil College because of the competitiveness of the game.

“We played well and they had a late siege but we were able to stay on top and come out with a win,” he said.

Sonntag played on Old Mill High School’s Varsity Women’s Lacrosse team, after playing club throughout her childhood. She said while playing on her high school team benefitted her, it was her club team that prepared her most for the NJCAAspell out on first reference level.

She added she exercises and works on her techniques outside of practice to keep improving.

“I run on the off days and try to keep up with my stick work,” she said.

Sonntag said while her stick work has improved this season, she’s “good at having field vision.” She said having awareness on the field is important during games to predict what the future actions of surrounding players.

Head Women’s Lacrosse coach Jim Griffiths said he is impressed with Sonntag and her teammates so far.

“We knew she had the potential to be good,” Griffiths said. “And she, along with other girls, have done an outstanding job.”

Griffiths said the team can succeed this season as long as the players don’t get too many injuries.

“We’re just struggling with some injuries right now, so hopefully we can get everyone healthy shortly and get back to full strength,” Griffiths said. “I think we have the potential to be very good.”

Luke Schwartz, a golfer and first-year business administration student, led Riverhawks Golf this season with a fourth-place finish in a match at Hagerstown and a 10th-place finish at Cumberland Country Club.

Schwartz, who finished fourth with a score of 88 at Hagerstown and 84 at Cumberland Country Club, started golfing five years ago, while he was in middle school.

He said he prides himself on his putting skills, but still strives to improve in other areas.

“I’m always working on my putting, but as of right now I’m just trying to manage the golf courses better,” he explained. “That’s just about the only thing that’s affecting my scores right now.”

Schwartz said in addition to practice, he goes to the hitting range almost every day.

“He’s just somebody who always shows up to practice and works hard,” Lyons said. “He really takes it seriously and is definitely a huge asset to the team.”

Lyons added that Schwartz’ ability to play well consistently is a characteristic that is beneficial to golfers.

“He just kind of comes in with a good result week in and week out,” Lyons said. “He doesn’t really fluctuate much.”

edits/ May 1 3:05 p.m. -Added quotes and information cut from physical edition for space