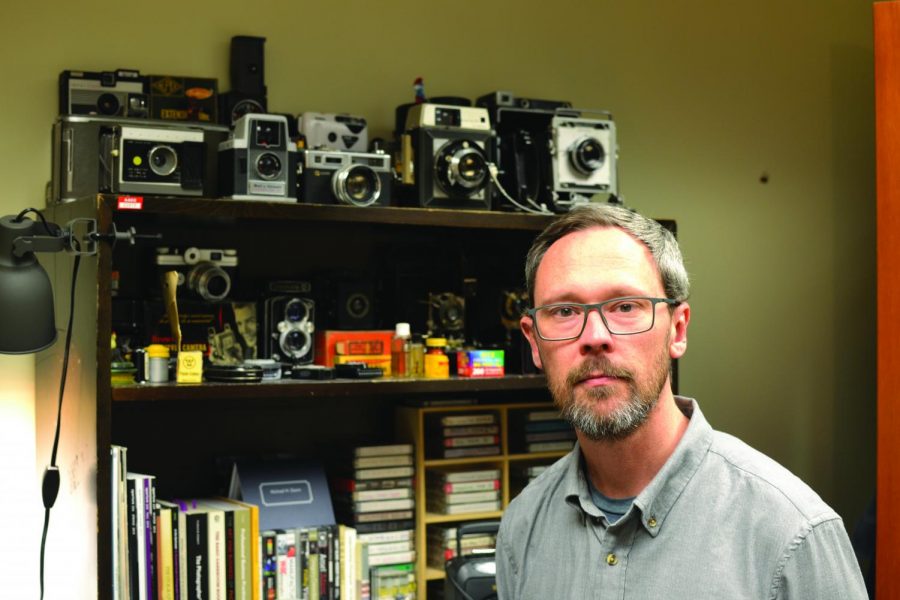 Matt Moore, chair of the Visual Arts Department, advocates for students who want to major in art.

AACC art students say their families don’t always support them as they pursue their creative dreams.

Some told Campus Current their parents would prefer it if they chose a major that would lead to a more financially stable career.

Sarah Evans, a second-year fine arts student, said she only recently began taking art classes at AACC because her parents wouldn’t allow her to go to art school.

“They didn’t see it as practical,” Evans said. “Finance, accounting. … My mother is a chemist, so be a scientist. … But I don’t like any of those. And if you don’t like it, you don’t study it hard. You don’t do well.”

Diane Osburn, a first-year visual arts student, said she chose to study art after losing her job in finance when another company bought the bank she worked for. She said she has creative hobbies, and uses sewing, ceramics and photography as a getaway from the rigidity of her job. Yet she said she has been interested in crafts since elementary school.

“Banking—that’s just sort of where I ended up because I just started working out of high school,” Osburn said. “It’s where life took me.”

Osburn took photography courses in college but didn’t pursue a career in photography.

“It’s corporate America,” Osburn said. “I wasn’t driven by money but you need to be able to survive.”

Some faculty members who teach art said they experienced similar challenges as students.

“There was some tension … because everyone in my greater family are business people,” art professor Chris Mona said. “They’re all entrepreneurs. They all have their own businesses or they work for family businesses.”

Matt Moore, chair of the Visual Arts Department, said students who want to pursue art as a career but whose parents discourage it should take courses that are creatively engaging, even if they don’t major in art.

“As they mature and as they show their parents that they’re able to do well in the field of art, their parents will become more open-minded about the idea,” Moore explained.

An art major doesn’t necessarily leave a graduate with few options. Moore said students who choose to study art can pursue a variety of careers.

“When you’re majoring in art, you’re learning to be a critical thinker,” Moore said. “There are a ton of creatively minded jobs out there … for example, public relations and marketing, where they need critical thinkers and they need creatives to come in and help them figure out how to brand, how to market, how to sell things.”

On Liberal Arts Day last year, Moore’s department handed out flyers with quotes by billionaires Mark Cuban, the owner of the Dallas Mavericks basketball team, and the late Steve Jobs, co-founder of Apple, on the value of liberal arts degrees.

“People who are working at Apple, people that are working at Google … they’re hiring artists … they know that they can take those problem-solving skills that we teach them and apply it to a multitude of problems,” Moore said. “Apple’s whole deal is design. That’s what they do. There’s a sh*tload of jobs right there that are employed by creatives.”

The boom of information technology in the 21st century has reframed art as a career. Once, the stereotype of the starving artist prevailed, but now corporate marketing teams seek artists to modernize their look and distinguish themselves among the herds of competitive brands.