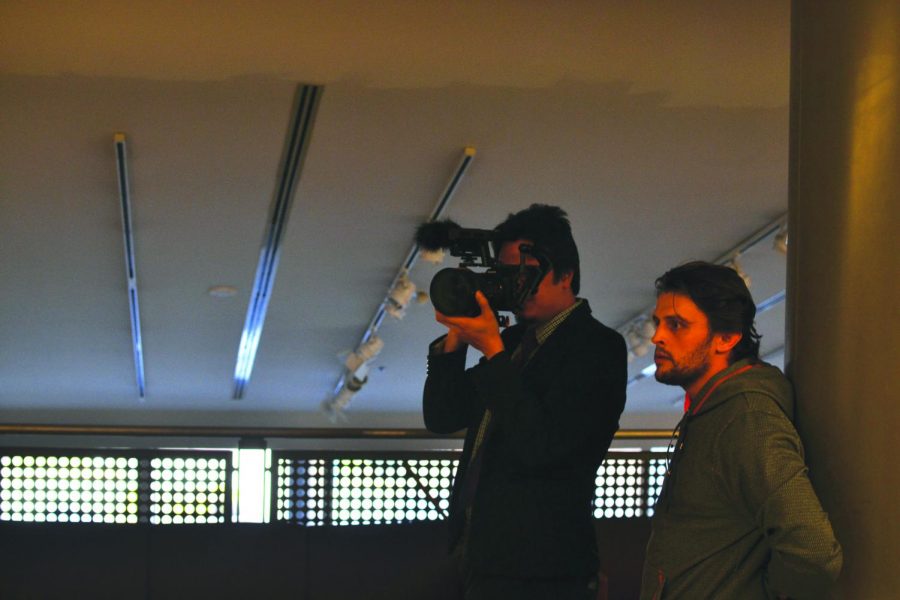 James Katzaman, a first-year transfer studies student (left), and Dylan Siebenhaar, a third-year film student, are members of the Video Club. Katzaman will enter his work in a campus film festival in April.

Delivuk, a video professor, said any AACC student with a knack for video can enter. The filmmakers do not have to be enrolled in film classes or be members of the club.

“The goal really is so that students, even if they’re not really in this program, they know about the festival, so even if they wanted to submit, they could,” Delivuk said.

Kenny Mullings, first-year transfer studies student and Video Club present, said he came up with the idea for a film festival after attending one at Stevenson University. He said it could engage the entire campus.

Mullings said the club will offer a monetary award for the best film in the categories of comedy, horror, drama, documentary, super-short or creative video.

“My love for horror films and wanting them to be better than the stuff that was put out in the last decade is what drove me to take film classes and want to be a filmmaker,” Mullings said.

The maximum runtime for a submission is 15 minutes, while anything four minutes or shorter falls in the super-short category.

More ambiguous or experimental works that new filmmakers may submit would fall under the “creative” category.

James Katzaman, a first-year transfer studies student, said he plans to major in film and spends “too much money” on camera equipment to not do it professionally. Katzaman said he plans to submit something for the film festival.

Mullings said he encourages people to submit their work.

Delivuk said she hopes to create an alumni category so recent graduates can come back and showcase what they have been working on.

“I think that’s important so that students know… how does the student’s work kind of change since they were a student here,” Delivuk said. “You get to see that growth.”

Dina Fiasconaro, an associate professor of film and moving image at Stevenson University, will jury the festival. Fiasconaro, a Baltimore-based filmmaker, has released a number of shorts, and has directed music videos and a feature documentary.

Submissions for the film festival, which will take place in the theater in the Humanities Building, are due by April 5.