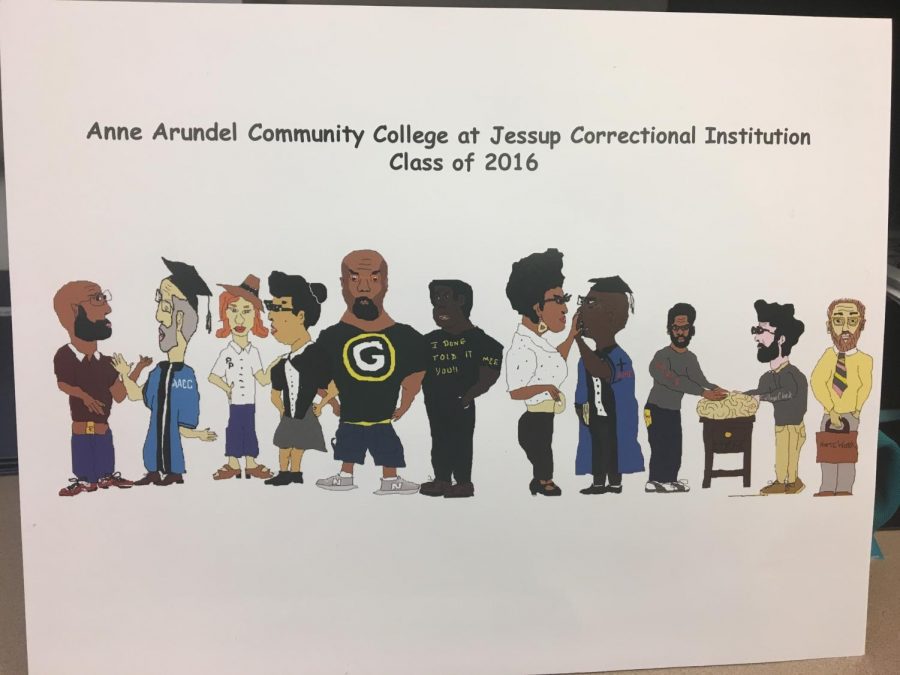 Eric Brunner, an inmate at Jessup Correctional Institution, created a digital photo of the 2016 class of graduating prisoners who earned certificates from AACC.

Sporting a Riverhawk- blue cap and gown, retired U.S. Marine Robert Lee Moore marched to the front of the room alongside his fellow AACC graduates in 2016 and proudly accepted a diploma for completing a certificate in computer literacy.

He was 59. And he was serving a 37-year sentence at Jessup Correctional Institution.

“Education tells you nothing is impossible,” said Moore, a husband, father and grandfather.

Moore is still in prison, and he still takes AACC classes. In fact, Moore is one of 10 inmates in his entrepreneurship class at the prison.

Two years before Moore, who has a criminal record of second-degree rape and kidnapping, got his first diploma, AACC business and entrepreneurship professors began working part-time at Jessup.

“We’re giving them skills they can use immediately when they get out,” Pamela Polgreen, AACC’s coordinator of accelerated cohort programs, said.

“Even though we don’t share the same classroom, we share the same teachers and the same learning philosophy,” inmate Patrick Holmes, who has been at Jessup for 24 years, said.

“It’s been a journey,” Moore said. “I’ve seen the bad [and] now I can see the good. Businesses will  see my certificates and say, ‘Oh, this man has value. He understands the technology [that] businesses today need.’”

Moore said he wants to start a company to help small businesses learn how to better use technology to grow their brands.

“What is given to me, I need to give back,” Moore said.

Zakaria Oweiss, who is serving a 17-year sentence, said he wants to work with schools to teach troubled youth how to solve problems in non-violent ways.

“If I knew then what I know now, I’d be on a very different path,” said Oweiss, who has a criminal record of first- and second-degree murder. “I take my challenges and turn them into something positive. … If we think before we act, the outcome can be different.”

“I was so scared when I first came [to Jessup],” Oweiss said. “[The classes] create a home environment that is positive.”

Anthony Joyner, who has been at Jessup since 2014, said he  wants to run a music production company for gospel and blues artists.

“It’s definitely a blessing to take these classes and try to stay on a course,” Joyner said.  “These guys really work together.”

Levar Douglas, who has been at Jessup for nine years and has charges of drug possession and assault, also said he wants to turn his passions into a future business.

Growing up on a farm, Douglas, who was also charged with murder, said he plans to start a plant-based farming company to teach others how to grow healthy foods.

In addition, Douglas said he wants to own a business that cleans up crime scenes.

Student inmates said they hope to be as successful as the students who take classes on AACC campuses.

“We’re thirsty, we’re hungry and we want the same things you do,” Darnell Roberts, who is serving 11 years, said. Roberts said he wants to train youth athletes both physically and academically.

Not all of the prisoners know if they will get a chance to use their education beyond the prison walls.

Holmes, who is serving a life sentence but is working with a parole officer to shorten his time, said he takes entrepreneurship classes so he can realize what prisoners need to know in order to re-enter society.

“Sometimes in society we think of convicted felons as morally bad people, and of course some of them are,” Lou Carloni, who teaches Introduction to Business at both Arnold and Jessup, said. “These are men who made one or two very serious mistakes—they are otherwise good men—doing everything in their power to make it right.”