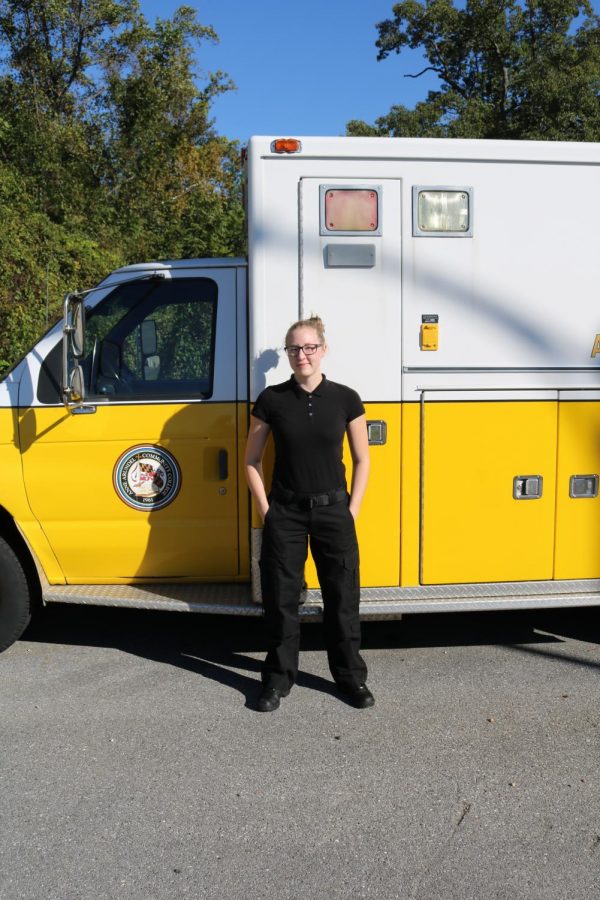 When she’s not in class, an 18-year-old AACC mechanical engineering student is busy saving lives as an emergency medical technician.

First-semester student Lydia Rutledge said her interest in the profession started when her friend encouraged her to come along with her to fire school last summer.

Rutledge said she decided not to follow her friend to training, but instead pursue her lifelong hobby of horseback riding.

But this changed when her friend returned from her training in New Jersey and Rutledge felt guilty for missing out on the shared experience.

So, Rutledge said, she gave up riding to follow in her friend’s footsteps. Although the friend chose to pursue fire school, Rutledge decided to become an EMT. She finished her training in July.

Rutledge said she planned to go to Loyola University for engineering, but decided on AACC instead. “The environment [of AACC] is different,” she said. “It has made me appreciate my education more.”

She said balancing school and work is worth the benefits she gains as an EMT.

“You need that aspect of life,” she said. “Once you do it, you love it. I even met my boyfriend doing it.”

“The things you see aren’t easy, but I can confidently say that if someone were about to die right now, I could save them.”

Rutledge said one of the most memorable experiences she’s had as an EMT was when she helped rescue a seizing man who overdosed on heroin.

“The paramedic I worked with had to call the hospital, which left me alone with the patient,” Rutledge said. “It was really my first time doing any of this by myself and it was an awesome way to test my skills.”

Rutledge once bandaged up the foot of a boy, who stepped on a nail, a skill she said she wished she would have known when her brother had the same injury years before.

“It just reminded me of the skills I had acquired and the person I had become because of it,” Rutledge said.