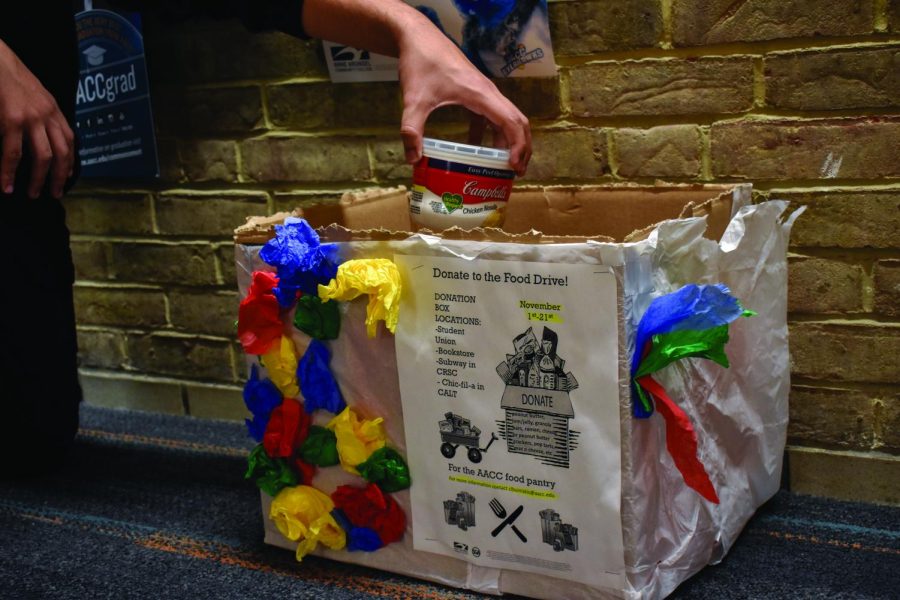 AACC alum and adjunct instructor Courtney Buiniskis’s communications students donate to the food pantry as part of a class project this semester.

An adjunct instructor who graduated from AACC in 2008 is teaching her communications class how to use the media to give back to the community this fall.

“I love the students, and I love the atmosphere,” said Courtney Buiniskis, who started teaching here in 2016. “It only took one semester to hook me in.”

For the first time this semester, Buiniskis created a two-month service learning project for her Introduction to Mass Media class.

The goal of the project, which the students began working on in September, was to “learn how to use mass communications to aid others in need,” Buiniskis said.

The class’s mission was to collect canned foods for the AACC food pantry, and use various methods of communication to advertise the project. The college awarded each student 10 service learning hours for giving back to the community by completing this project.

Buiniskis divided her class into four groups of five or six students, one of which created posters and flyers to advertise the event across campus. One of the students who plays AACC’s mascot, Swoop the Riverhawk, is in Buiniskis’ class. Buiniskis said Swoop plans to cover campus with these flyers, in costume, to raise awareness for the food pantry.

One group designed an ad for the November issue of Campus Current, while another created a social media ad, which the Office of Student Engagement started posting on its Instagram, Twitter and Facebook pages last month.

Buiniskis said she hopes the project encourages her students to “think about something other than themselves.”

“Mass communication can be used for a good thing other than just sitting on your cellphone for six hours,” Buiniskis said.

Her students said they successfully learned this lesson.

“The thing I liked the most was being able to do something creative that was also going to be used in a meaningful way,” one of Buiniskis’ students, first-year environmental science student Julie Sterba, said.  “This project wasn’t just for a grade, so that made it fun to work on. The ad is to spread the word to donate to the food bank, and having our work go towards something so helpful is pretty cool.”

“My favorite part of the project was when our social media group got together to film a little skit about helping out the food pantry so that the people that get food from there can have a variety of items,” Sterba’s classmate,  second-year transfer studies student Marvin Fernandez, said.

“We also knew that people generally shy away from free handouts and feeling needy, so we also put out a message through the skit saying that those people are not alone and can always ask for help.”