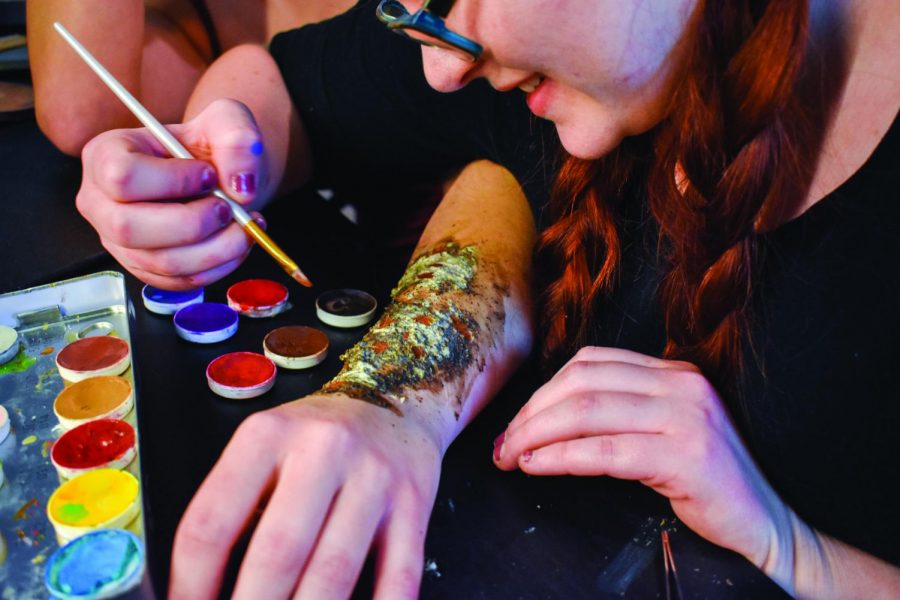 Third-year entrepreneurship student Emily Sokolowski does special-effects makeup and plans to start her own makeup company in the future.

When Emily Sokolowski was a junior in high school, she was falling down the rabbit hole that is the internet as she avoided her chemistry homework.

The third-year entrepreneurship student haphazardly entered an online makeup contest while browsing the web, and although she didn’t win, it ignited her passion for makeup.

Sokolowski said she has enjoyed playing with makeup since she was a kid, and ever since the night she entered the contest, she has delved into the beauty world, discovering her dream to move to California and do special-effects makeup for movies.

Although she was eager to jump in head first after high school and move west to work as a freelance makeup artist, Sokolowski’s parents required her to get a college education first.

So she chose AACC’s entrepreneurship program to help make her dreams come true.

“When I first graduated high school I did not know what I was doing,” Sokolowski said.

“All I knew is that I was going and I was going to make it, but I didn’t stop to think about how to make it.  From going to school and learning the ins and outs of businesses, I think it really helped guide me better.”

Sokolowski said while living at home, she has had more time to perfect her skills in special effects makeup, which she said has been a long and tedious process.

When her creation was complete, at 1 a.m. on a cold November morning, Sokolowski made her sister pose outside for a photo shoot, she said.

“She was standing out there in a tank top … because the makeup went all the way to her neck, just next to these trees like, ‘Can you please just hurry up?’” Sokolowski recalled.

But her projects don’t always end in photo shoots. Sometimes they end in disaster, she said.

“My grandma I tend to scare the most,” Sokolowski said. “I’ll be doing [special-effects makeup] down in my room and she won’t know. Then I’ll come up to eat or something and she’ll be like, ‘What is on your face? What did you do?’”

Once, Sokolowski said, she made her finger look like it was split in half and went upstairs to scare her grandma during dinner.

“She was talking about taking me to the hospital,” Sokolowski said.

“There have been looks where I have been sitting in my [makeup] chair [practicing special effects] for four hours and I’ll just do one thing that messes up a whole piece of the look,” she said.

She said this causes her to start from scratch.

But Sokolowski said one of the highlights of her makeup journey so far is that she can combine it with her career as a line cook and specialty dessert creator at Libations, a tavern in Millersville.

Sokolowski bakes all the dessert specials and gets to decorate her creations, which she said is a lot like putting on makeup.

She once did zombie makeup for the tavern’s customers to mimic “The Walking Dead” theme of a new beer it was selling.

“Every artist has their own creative process, and no matter what medium you are using, it’s all basically the same way of thinking,” Sokolowski said.

Sokolowski, who will graduate in May and hopes to attend Cinema Makeup School in California, said AACC has inspired her to open her own makeup company someday.