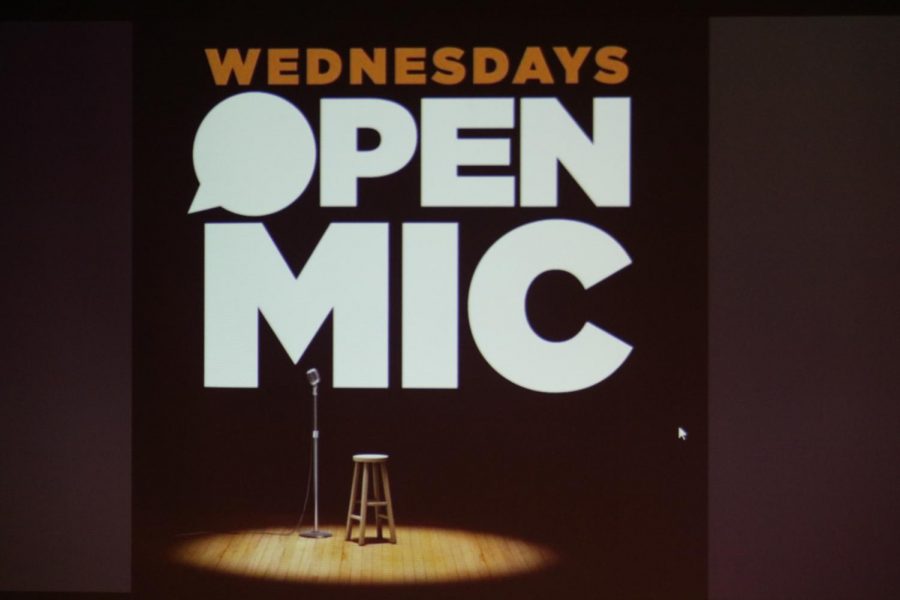 For coffee house performances, he said he plans on “keeping with tradition” when it comes to how the show is run.

The event is casual. Any student can sign up on a yellow legal pad to perform anything they would like. Tea, coffee and cookies are served during intermission.

The audience during coffee house is small, but captivated by each performance. On this night’s event, familiar faces from Amaranth are seen throughout the crowd and newcomers are scattered throughout.

During his second poem, titled “Vampire,” his voice fills the room.

After his performance is over, a few students stand to applaud.

“This is my second semester at AACC and I didn’t know this [coffee house] was a thing, but I’m glad I do now,” he said before performing.

Burns performed several songs and poems, some covers and others originals.

“I’ll definitely be performing next month,” he said. “There are a lot of interesting people here tonight performing, doing things I didn’t expect them to.”

During her performance, she makes a mistake while playing the piano but picks back up as if nothing happened. Her voice can be heard in the hallways with the auditorium doors closed.

This is her first coffee house as Amaranth’s layout manager.

“I like the way [Mike] thinks as an editor,” she said.

Bishop said she remembered Pierzalio performing at a previous coffee house and “loving his performance.”

“He walked up and said ‘I hope you f—cking like heavy metal’ and just went for it,” she said.

When Pierzalio took the stage, he grabbed his guitar, covered in a variety of stickers and said: “I hope you f—cking like heavy metal.” Then he added: “And 90s pop music.”

The crowd watching is full of artists. Almost everyone who attended the event performed sometime during the night.

First-year addiction counseling student Adam Konsistorun, sat in the back watching before taking the stage after intermission.

“I just wanted to plunge right in,” he said.”

Robert Evans, a first-year student and first-time attendee of the event said he “plans on coming again.”

“It’s nice to see a community doing things and supporting each other,” he said.