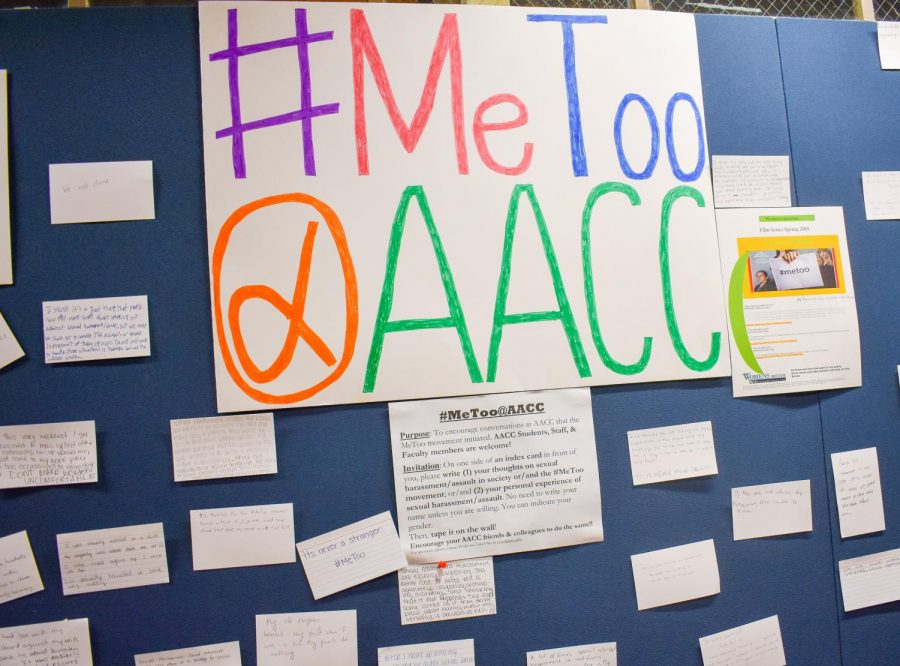 A wall in the Humanities building shows students’ responses to the #MeToo movement, a national conversation about sexual harassment.

AACC hosted events, movie nights and displays across campus in April to raise awareness of the #MeToo movement.

Social activist Tarana Burke started using the phrase in 2006 on Myspace, a popular social network at the time, to create what she called a movement of “empowerment through empathy” among black women who experienced sexual assault.

Actress Alyssa Milano popularized the hashtag #MeToo on Twitter in October 2017, when she tweeted: “If you’ve been sexually harassed or assaulted, write ‘me too’ as a reply to this tweet,” she told her followers.

Ono, who worked on the AACC “Race Card” wall displayed in the Humanities and Careers buildings during Black History Month in February, set up sexual harassment posters and notecards across campus so students could share their thoughts and experiences.

“I wanted a visually appealing way of creating a conversation on campus,” Ono said. “This is not just Hollywood. It’s us.”

On the first floor of Humanities, more than a dozen cards taped to the walls reveal students’ thoughts about #MeToo.

Some of the cards include praise for the movement, saying it is necessary for society to discuss the issue.

Others are more graphic and reveal the sensitive experiences of the students who wrote them.

In one corner of the board, six note cards lie on top of each other, describing an occasion when a student was raped by her ex-boyfriend.

“I think the cards are great and powerful,” Sarah Escalera, a third-year transfer studies student, said. “A lot of people say, ‘Oh that can’t be happening to her,’ but it is.”

Escalera said it was “great” a male professor organized the events.

“Men are [being] supportive of #MeToo, but I think the majority aren’t, which isn’t right,” she said.

“This is an ongoing issue, but I think we as a society can make changes so that these issues become less serious and pervasive,” Ono said.

“If we look back to the past where no women of any races or economic status even had the right to vote … for example, we as a society has changed. The current society can change, too.”