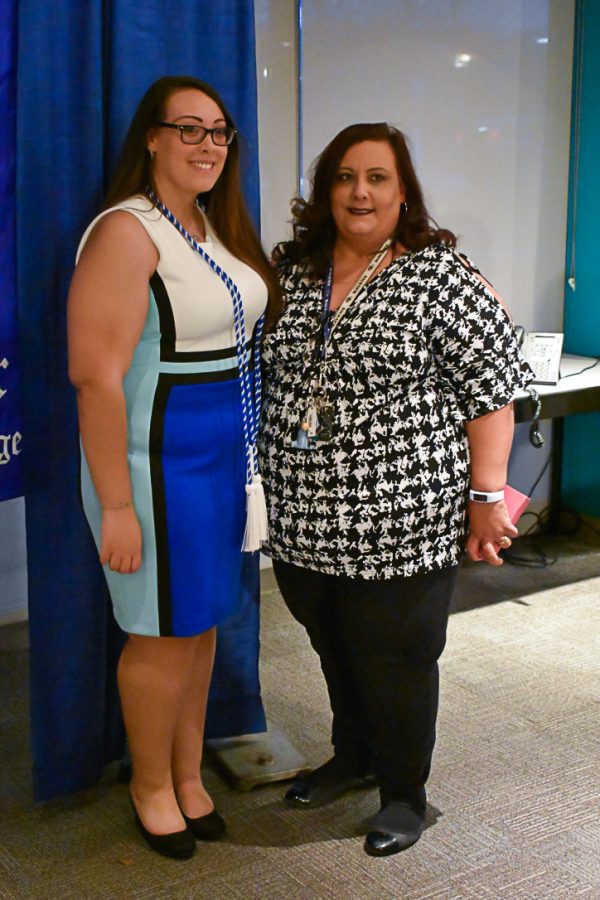 Mia Rogers-Vega—a second-year cyber forensics student and one of this year’s Epsilon Chi inductees—poses with her mother, Sheila Rogers-Vega, after the ceremony.

The campus chapter of Chi Alpha Epsilon celebrated its 10th anniversary on April 23 by inducting 56 students.

That brings the number of members—who all began in developmental, noncredit classes and earned a 3.0 GPA—to 525.

Brooke Cox, a fifth-year radiology student with a learning disability, is glad she was inducted, she said, because her family is proud of her.

“It’s really an achievement for me,” Cox said. “It’s been very tough, but I’ve put forth the effort in all my classes.”

“[The students] have proven that [they] can achieve greatness,” said Alycia Marshall, AACC’s associate vice president of learning and academic affairs. “Anything worth having is worth working hard [for]. I commend [them] for the steadfast determination and perseverance that led [them] to this point.”

“We need to provide opportunities for all students to succeed, and the inductees are proof of that,” said Dean of Liberal Arts Alicia Morse.

The honor society has 170 chapters at colleges and universities in the United States. In the past nine years, AACC has inducted 469 students and 25 honorary members into its chapter, according to Morse.

“It feels great to know that all my hard work paid off,” said Mia Rogers-Vega, a second-year cyber forensics student and one of this year’s inductees.

According to Tekora Scruggs, Epsilon Chi is the only active chapter in Maryland, Washington or Virginia.