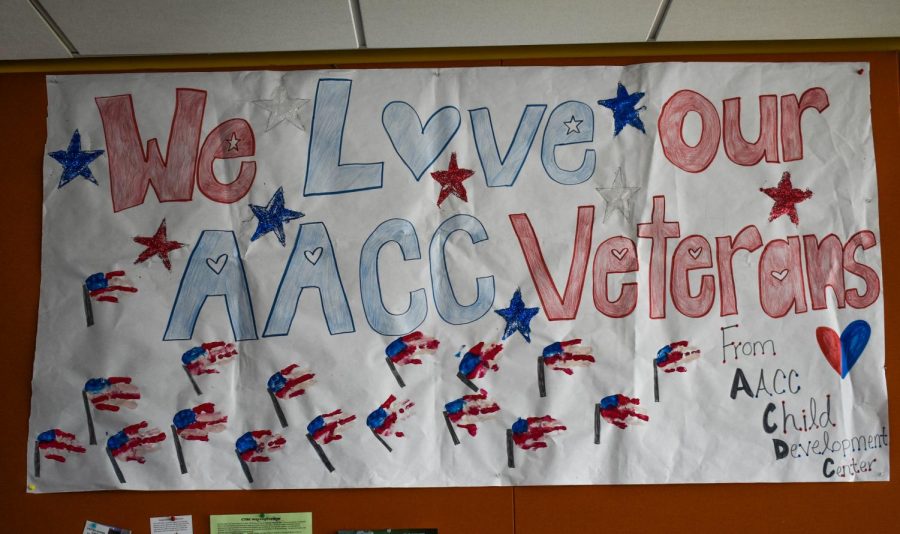 The Military/Veteran Resource Center in the library is open every weekday from 9 a.m. to 5 p.m.

Veteran undergraduate students make up 4 percent of the national student body, according to the National Council of State Legislatures. A small population means their unique needs can fall through the cracks.

A common reason veterans decide to attend college is “because they didn’t have any formal training in the military with a job that would translate in the civilian workforce,” said Harlan Harrell, AACC’s military/veterans student success and retention adviser.

“I decided to go to college because being a grunt isn’t a job in regular society,” said Drew Chrostowski, an Army veteran and first-year business administration student.

“They retrain me to have another job because of my disabilities from the Army,” said Mike Kulikowski, a second-year homeland security student. “I picked homeland security [as a major] because it’s close to what I did in the military.”

Veteran students make up a subculture that brings their unique experiences and challenges to the classroom.

“I don’t want people getting the wrong impression that every vet is going to go postal, but there are a lot of vets who have a lot of different problems,” said Kulikowski, who is a peer adviser at AACC’s Military/Veteran Resource Center.

“Some have a low tolerance for stupidity. Sometimes it’s an anger management thing. Any little thing can usually trigger a vet to outburst.”

Ben Beares, a second-year homeland security student who serves in the Army National Guard, has difficulty when “students give speeches on things they don’t understand”—like suicide. “I lost a significant amount of buddies in my unit to that,” he said.

He said he held in his frustration until he could speak after class to the student presenter who talked about suicide.

Student veterans have to deal with classmates and professors who misunderstand their military service.
Harrell recalls a time at AACC’s Arundel Mills campus when students vandalized a veteran’s car after they recognized him from an HBO documentary about his unit in Afghanistan.

On another occasion “a veteran wrote about the war [for a class project] and [faculty] tried to turn him in for student conduct like he was going to do something, when basically he was just writing about his military experience,” Harrell said.

“My biggest stressor is restraining my opposing views in class,” Chrostowski said. “I’ve had professors say things like, ‘You’re not a real soldier; you didn’t serve in the real military.’ These are people who never served, making comments about somebody’s branch [and saying] ‘baby killer.’”

One of the biggest mistakes veterans attending AACC make is “not reaching out to fellow veterans,” Harrell said. “I tend to find them after they get in trouble. After they get reported for talking about killing in class.”

“I’d encourage veterans to visit the Veterans Resource Center,” Beares said. “It’s a good source. Utilize the benefits and assets we have here.”

To help bridge the gap of understanding, AACC offers a course called “Meet the Military Learner” for faculty and staff, Harrell said, “to talk about these transitional challenges and educate the faculty and staff, so they can have good classroom management.”