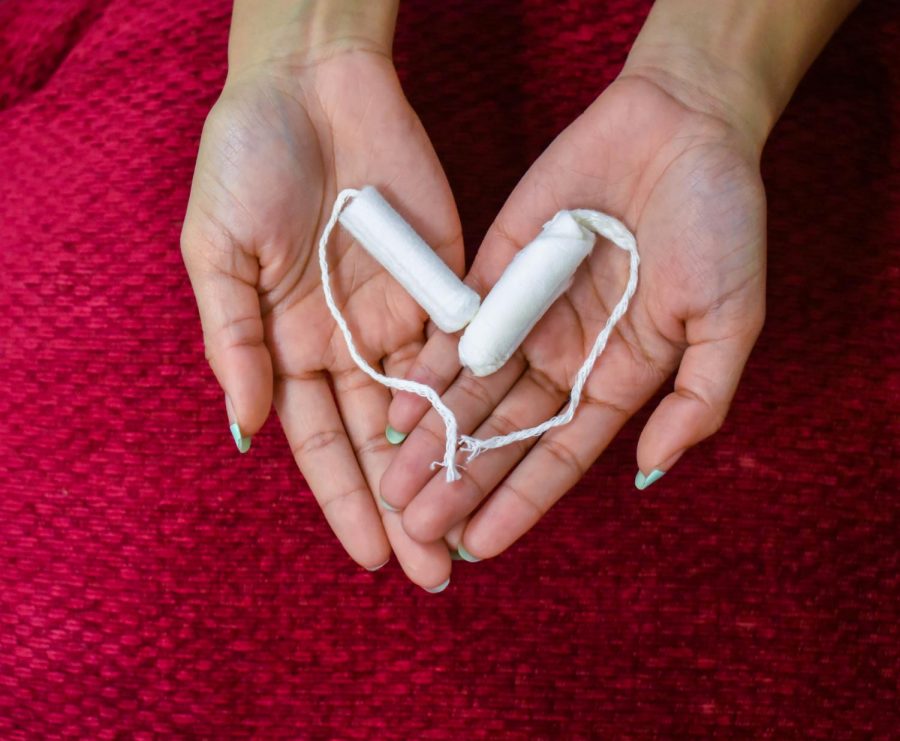 Women across college campuses say tampons and menstrual products should be free.

Almost every woman can remember a time when her period showed up unexpectedly. For first-year nursing student Johna Anderson, that occasion was unforgettable.

Anderson was minutes away from performing in her high school’s final dance show. She was stressed, knowing that the next few minutes were crucial for her team’s performance. Then she went backstage to fix her costume and realized her period had started.

“There was no [tampon] dispenser in the bathroom and I didn’t have any change with me,” she said. “I was 15. I was so embarrassed.”

Like Anderson, many women struggle to find feminine hygiene products when their periods show up unexpectedly.

In fact, a survey by Free the Tampons, an education and advocacy organization, showed 86 percent of women have been caught without the supplies they need.

Across campus, coin-operated tampon and sanitary napkin dispensers are in every women’s bathroom. And the campus Health Center in the SUN building stocks free feminine hygiene products.

But some AACC women, like student trustee Nyia Curtis, a third-year entrepreneurial student, said free tampons should be available in women’s rooms.

“I feel like, even though they are 25 cents, when you are going through an emergency … the last thing you think about is having a quarter,” she said.

“It’s one of those everyday things that I think should be free, like soap,” Curtis said. “You need it just as much as soap; so, why not make it free? People need soap; women need tampons.”

On a few tampon dispensers around campus, women have scribbled messages like, “These should be free”; “College should have this for free”; and, “Why are these taxed?”

“I’ve definitely seen the writing on the dispensers,” said first-year history major Kimberly Lewis. “I definitely think the girls writing on the machines have a point, but I wouldn’t go so far as to [write] graffiti on a school machine.”

As for free tampons, Lewis said, “Female students should be responsible for themselves.”

Although the Health Center offers menstrual products for free at a Self-Care Station, Curtis suggested that it should place them outside of its door next to the supply of free condoms it offers.

Carol Jacobson, a tobacco treatment specialist who works in the Health Center, said some women who walk into the center seeking menstrual products are embarrassed to ask for them, especially when a male is working at the front desk.

So Health Center staff place them in a self-care station inside the nurse’s office in SUN Room 120 so “they can just grab what they want and go,” Jacobson said.

Women can take the tampons they need for the day and leave, or they can use the private bathroom in the Health Center.

Some students said those resources are not enough.

“If I’m in class and I leave to use the restroom, and suddenly I get my period, what do I do?” said first-year education student Kelly Savage.

Savage argued that most women don’t carry quarters, so a free supply in restrooms across campus would solve a common problem.

“Every girl has the same story of that time they were trapped in the restroom without having any [change] on them,” Savage said.

Still, not every woman student at AACC supports free tampons in campus bathrooms.

“As nice as it sounds, I don’t think it’s a good idea,” said Rachel King, a first-year mechanical engineering student. “I can see a lot of girls taking advantage of it and shoving a bunch in their purse.”

She added: “They are really expensive. It would be nice to have them be free, but by the time you’d get in there, they’d all be gone.”

Within the past year, dozens of women petitioned for free tampons on college campuses across the country.

Divacup.com, a website that sells menstrual cups, says the average woman uses 240 tampons a year and 9,600 over a lifetime—at a cost of about $3,831.

“That’s money I could invest into my photography business,” Curtis said.

“That’s money I could invest into my education, money I could’ve invested into taking care of my family. I feel like there are an infinite amount of things I could do with that money.”