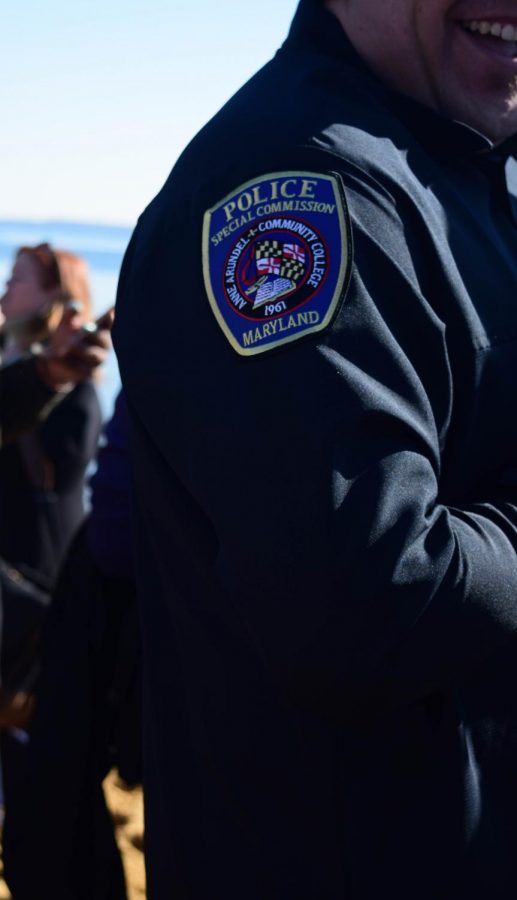 The money will help fund athletic events organized year-round for people two years old and up with intellectual disabilities.

“ [Special Olympics athletes] give so much heart and passion into their activities,” Gottschalk, a six-time plunger, said. “We do it for them.”

With a high of only 47 degrees, the “Police Plunge” missed the unusually warm weather—at a high of 63 degrees—that graced the main plunge held the following day.

While some participants only got their feet wet, AACC’s officers raced to the plunge boundaries for a customary high-five with safety divers.

“[The plunge] was a challenge, but it’s worth it,” said Shepet who completed his 10th plunge alongside his daughter.

AACC’s Major Cleveland Smith joined friends and family who lined the beach to show support for the plungers.

“[The officers] are dependable and committed to the cause,” Smith said. “Just like their commitment to their work on campus.”

The plunge is not the only Special Olympics fundraising event AACC’s officers participate in. During Tip-a-Cop, officers serve restaurant patrons for tips which they donate to charity, and in Cover the Cruiser, people can buy paper icons and stick them to a police car.

The plunge as a whole raised over $2 million for Special Olympics Maryland.