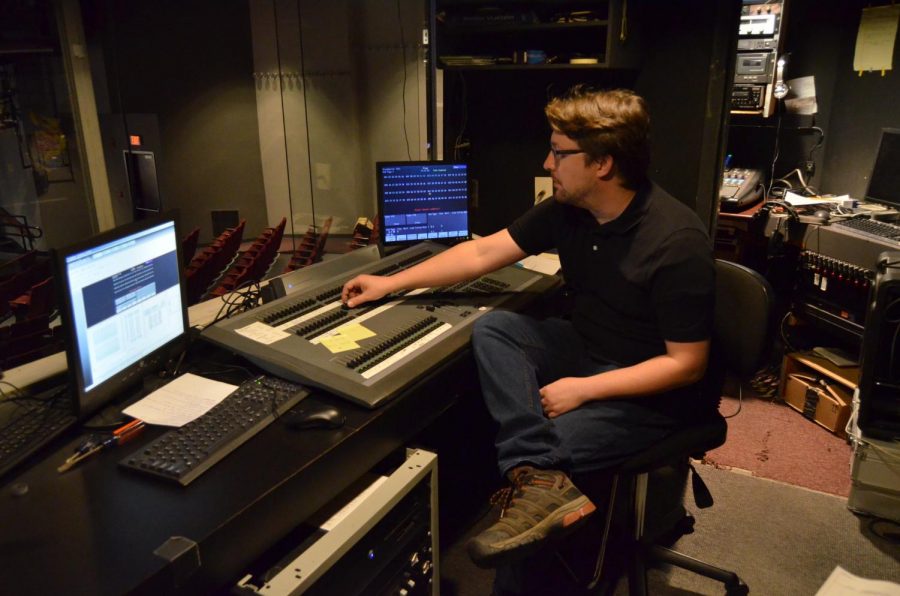 Theater professor Sean Urbantke shows off some of the electronics he uses in the production of shows. Photo by Brandon Hamilton

The stage is mostly dark, but a light follows someone running from her pursuers, panicked. An eerie haze billows across the stage, while screens in the background show bits of a cityscape. Scripted sounds echo around the hall, drawing the audience into the play.

As the pursuers close in, lights pulse and the music rises, bringing audience members to the edge of their seats. At the last moment, the woman escapes through a magic portal, represented by lights, sound and projected imagery.

All these effects were part of AACC’s recent production of the play “Neverwhere” and represent STEM—science, technology, engineering and math—in theater.

“[STEM is] kind of built into all the different areas of theatrical production,” theater program coordinator Sean Urbantke said. “Those are tools to get us to the artistic side of things.”

Second-year theater student and props designer for “Neverwhere” Victoria Scherini said she used geometry and algebra when designing the items, especially for the metal puppets.

“My biggest struggle was with the math-y parts,” Scherini said.

“[You have to] be quick on your feet to be able to make a change,” said third-year transfer studies student Nathaniel Johnson, who designed and recorded all the sounds for “Neverwhere.”

Robotics is another common STEM element to theater production, appearing in the form of hydraulics and pneumatics.

The Theatre at AACC used all of these elements in last year’s spring production of “The Addam’s Family.”

Each production also uses photometrics—the science of lighting intensity and angles—to set the scene for each production. Many plays also use chemistry to literally create the atmosphere on stage using atmospheric haze or adding pyrotechnic effects.

“What’s great about theater is that … there are so many opportunities for so many different skill sets and … backgrounds,” Scherini said. “Theater is great because there’s room for everyone.”

All of these elements have an underlying theme of hypothesis and revision.

“As an actor or as a director [you] form your hypothesis about how you think [a scene] could work, then you get everybody together in the room … and you see if the experiment [works],” Urbantke said.

“It’s that process for every moment in the play,” he said.