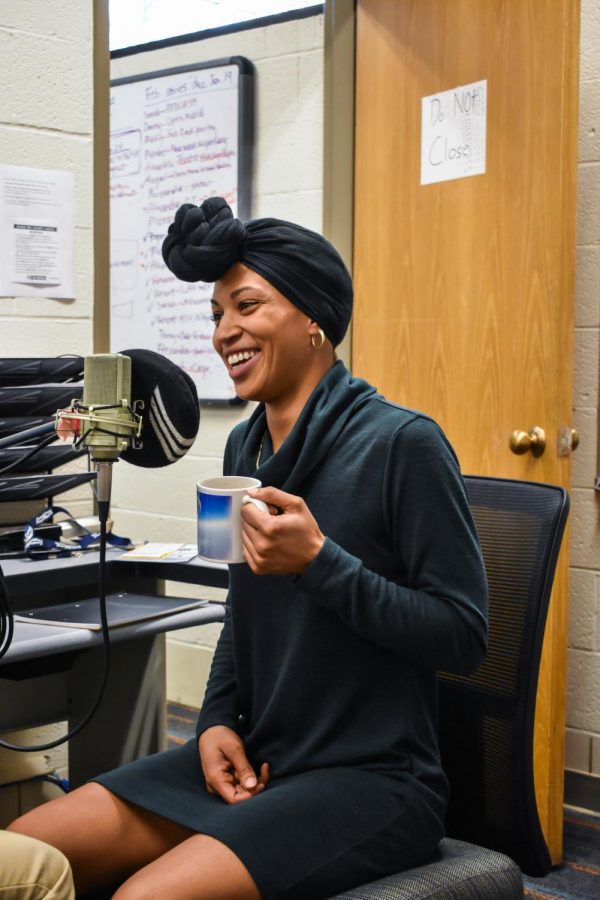 Nyia Curtis, a third-year enterpreneurship student, votes on policies as the student member on AACC’s Board Of Trustees. Photo by Sarah Noble

AACC is one of three community colleges in Maryland to allow a student representative to vote on budget plans, new protocols and policy changes.

Nyia Curtis, a third-year entrepreneurship student, is the only student member on the college’s Board of Trustees.

“AACC changed my life, and I want to give back,” Curtis said. “I want to bridge the gap between students and faculty and help students understand what the community offers.”

Curtis said one of the most important decisions she voted on this year was the adoption of AACC’s first applied bachelor’s degree.

Curtis attended Howard University to study broadcast journalism before coming to AACC. She said she was introverted and too intimidated to get involved in extracurricular activities. After realizing she wasn’t passionate about her studies, she dropped out of Howard and began taking non-credit photography classes at AACC.

Curtis said she wanted to get more involved on campus after she started taking credit classes. She joined as many clubs as possible, including the Students Out to Destroy Assumptions club, the Phi Theta Kappa honors society, the Student Government Association, the Entrepreneurs Club and Campus Current.

“People on campus know me as the girl who says yes to everything,” Curtis said.

This semester, she is on the Board of Trustees Development Committee, the AACC Foundation Board and the Campaign Steering Committee.

“Nyia is the student voice,” Director of Student Engagement Chris Storck said. “When the board is discussing topics, they may not have first-hand knowledge on how it affects students; she can speak for students based on her experience.”

“Sometimes we get a little too pragmatic as a board and look at things too cut and dry,” agreed Lawrence Ulvila, chairman of the Board of Trustees. “She helps us pump the breaks on certain issues, to make sure we don’t lose sight of the students.”

Likewise, Johnathan O’Dea, Student Government Association president, said, “I highly value the opinion of students, and it’s a huge strength to have someone to bounce ideas off of.

“Nyia and I pick each other’s brains about what is [happening] on campus,” O’Dea said.

Another student member will replace Curtis on the board this June when her one-year term expires.

“[A trustee] must be mature, have good communication skills and not be afraid to talk to people,” Storck said.

Montgomery College and Prince George’s Community College each has a voting student member on their Boards of Trustees.

“Embrace your experience [at AACC] and make it your own,” Curtis said. “Stay involved, stay interested, stay curious and just give it your all.”