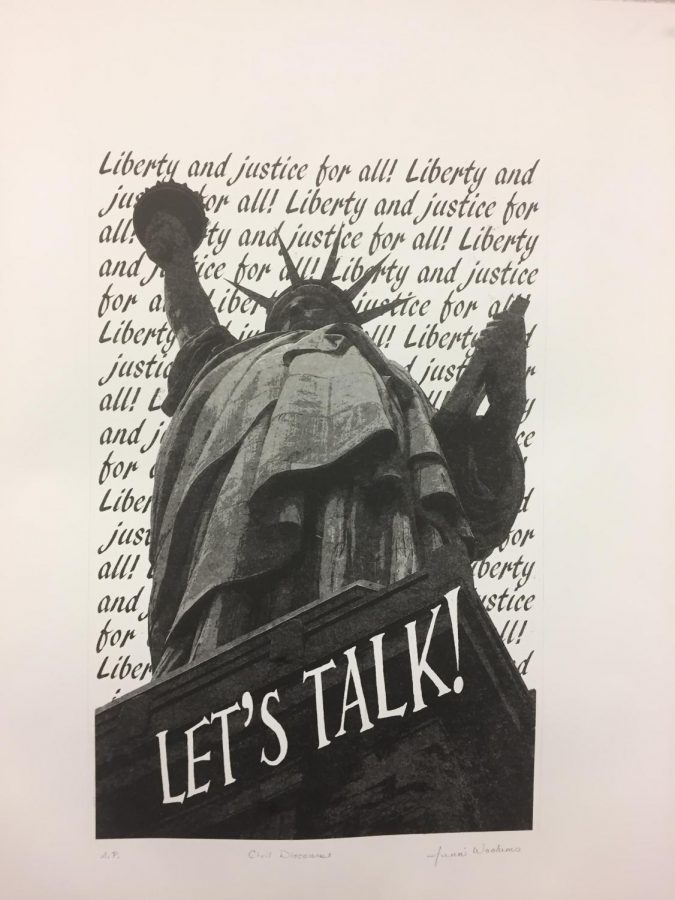 When art student Susan MacKinnon took a Lyft into what she described as the “desolate, run-down” depths of Baltimore to get art supplies, she saw the words “No Shoot Zone” painted on the side of a building near the store.

The scene inspired her to make a poster of a brick wall bearing the same phrase. She may bring it to a protest one day.

The Las Vegas shooting was Mona’s inspiration for the poster project.

Mona said he assigned the posters because “in screen printing, an idea can be mass produced and changed or put into the world within just a day or two,” and it is especially relevant because we are living in what he described as the “golden period of political satire.”

Mona said he realized, “We are in the thick of social awareness,” and his goal was to “help people with strong emotions make something positive and get their feelings out.”

“[My students] are here to learn from each other, respect each other’s opinions, and set an example for others to start talking with each other about these topics and stop shouting at each other,” Mona said.
Like his students, he also made a poster. His reads, “End Gun Violence Now,” in front of a green background “to represent life,” he said.

Although inspired by the Vegas shooting, Mona’s poster features no guns. Instead, Mona said, the artwork honors victims of mass shootings, rejects violence and attempts to avoid “feeding our country’s addiction to guns.”

Gretchen Amazeen, a print making student, created a poster with a cake with the words “Let Them Eat Cake” printed on it to bring awareness to local hunger. It also includes the location of the campus food pantry.

Sophomore graphic design major Melissa Cano made a poster of feminist Gloria Steinem with the words “We Shall Overcome,” representing the importance of the women’s movement to the acceptance of women in the home, the workplace and society.

Aside from their potential use during protests, MacKinnon said the posters will “resonate with others and continue the screen printing tradition of shared social concerns through contemporary art.”

Screen printing student and graphic design major Morgan Gordon pointed to the importance of design and execution throughout the project.

She said her favorite part of the project—during which she created a poster bearing the word “manipulated” to represent how the media manipulates society—was the opportunity to “get an idea across using symbolism.”

“Some posters define an issue very subtly, while some can be very blatant,” Gordon said.

The posters are on display in the SUN Dining Hall and throughout the SUN Building from Nov. 9 to Dec. 8.