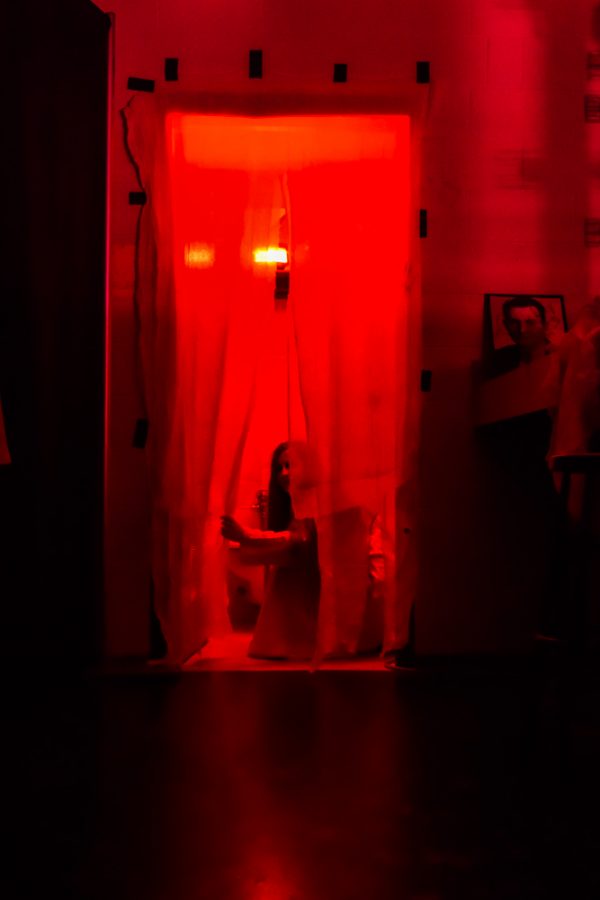 The theatre club used the backstage of Pascal to create a haunted house.

The theatre club hosted a haunted house on Friday the 13,  giving plenty of scares for everyone in attendance.

The house’s route began with a tour guide telling “stories” of those who have died in the theater.

The route included zombies coming out from the floorboards, chasing students. A dead girl crying in a bathroom lit with pink lights and a man in the rafters throwing skulls while laughing.

There were two skeleton performers  crawling out from under a table covered in old TVs and contorting their way to you, and ending with these characters coming together to scream as loud as they could.

“To me, [the scariest part] was right at the beginning when [the tour guide] said hello, it just caught me off-guard,” said freshman transfer major Connor Elmore.

Despite the haunted house covered with all kinds of scary creatures, this was not the club’s original plan.

“We had a whole plan originally that our president had for us, unfortunately with her being [sick] and unable to guide us we had to create a whole new one basically from scratch as of yesterday [Oct 12],” Sean Urbantke, program coordinator and performing arts theater director, said.

Set-up took the crew a day to complete.

Urbantke said the club spent no money to put it all together. They used stock costumes and many props from their future play “Neverwhere.”

Most of the props were donated from students and people in the community.

“Aw you know, getting screamed at, it’s fun, having- having a good scream, you know?” Ricky Dobry, a student from Northeast High school, said.