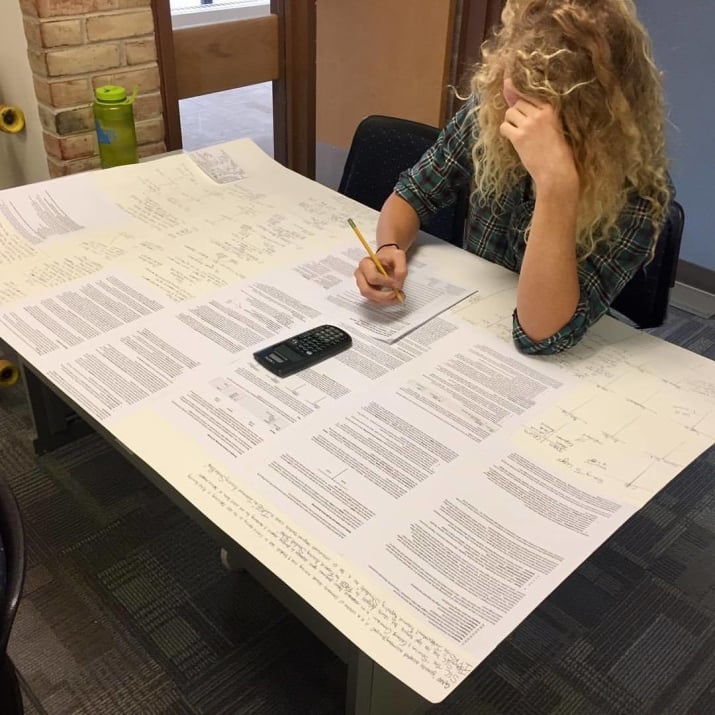 An AACC freshman exploited a loophole in his course syllabus to bring a 3-foot by 5-foot notecard to his test.

An AACC freshman exploited his syllabus to outwit his professor during an exam.

Freshman Elijah Bowen’s financial accounting professor said on the course syllabus students could bring a 3-by-5 card with notes for an exam. But the professor failed to specify what unit the cards should be measured in.

The card Bowen brought to the exam was 3-by-5 feet, not inches.

“I thought it would be funny,” said Bowen in an interview with Campus Current. “I wasn’t expecting him to actually let me use it. I had a back-up card just in case.”

Business administration professor Reb Beatty allowed Bowen to use his large card for the exam but required Bowen to sit in the back of the class room so that other students couldn’t see his rather large study aid.

Beatty said he has been teaching for seven years and has “always” given students the option of using a 3-by-5 notecard, but this is the first time a student has attempted to bring one measured in feet.

“I’m pretty specific most of the time, especially in a discipline like accounting,” Beatty said. “[But] I made a mistake [on the syllabus], and I’m going to take responsibility for that.”

Beatty updated his syllabus and testing instructions the next morning to be more precise.

The story has been featured on Buzzfeed, ABC2News of Baltimore, Good Morning America and USA Today, among other news outlets.

“I didn’t even know he was going to put it on the internet,” Bowen said.

Beatty said the “majority” of the comments on the photo were positive, but some commenters said they took issue with allowing a notecard, regardless of its size.

“I don’t care what I give you in terms of a test aid—you’re not going to do well if you don’t know the material,” Beatty said. “My goal of test aids is a preparatory tool … they’re going to learn the material by putting down what they think is important, by putting it into their own terminology and [by] organizing it in a manner that’s going to be useful to them.”

“I did pass the test,” said Bowen. “But I didn’t use much of the card—only a few times.”

“I’m proud of the student for coming up with it,” said Beatty. “I certainly encourage students to think outside the box.”