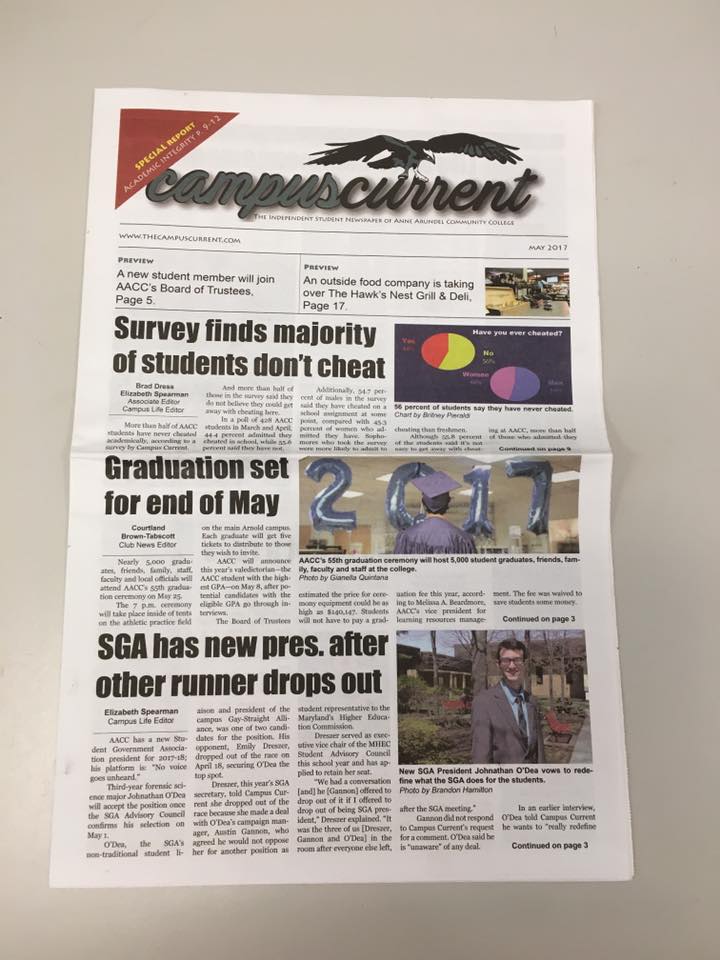 Campus Current’s May issue will be 20 pages, the largest print newspaper in AACC’s history.

The 20-page edition, which will be on campus newsracks and online at TheCampusCurrent.com on May 1, marks a milestone for the independent, student-run paper. Prior to May, the heftiest issue was 16 pages.

The May paper includes a four-page special report about academic integrity based on a survey of 428 students and 38 faculty members by students in COM 202, Newswriting 2. All of the students in that class are Campus Current editors.

Editor-in-Chief Jesse Johnson said he and Associate Editor Brad Dress wanted to “go out with a bang” before graduating this semester.

“At first it was just a joke,” said Dress of the plan to produce a 20-page issue. “Then it started to turn more serious … and we were like … let’s make history.”

The editors, their team of section editors, the faculty adviser and some reporters stayed late on many evenings throughout April, and a few worked more than eight hours last Saturday to get the paper ready on time.

“We knew when we initially thought of the idea … that it would take a lot of work,” Johnson said. “It felt really good once it was done.”

Professor Sharon O’Malley, the faculty adviser for Campus Current, said she was skeptical the small “handful” of editors could manage a 20-page issue, but they were “bound and determined” to make it happen.

“We really worked hard on this thing,” O’Malley said. “I’m so proud of the team. It’s amazing how far we’ve come from nowhere.”

Campus Current was dormant for nearly a year until last semester, when Johnson, O’Malley and former Editor Cody Colston relaunched it.

Students at AACC have published a newspaper since 1967, when it was called The Trailblazer. But it has not always had regular monthly issues.

The monthly newspaper has been growing steadily in size since then, reaching 12 pages in November, and then 16 in March, and finally 20 pages in May. Campus Current also updates its digital edition daily.

“Even as it’s getting bigger, it’s getting better,” said Dr. Steven Canaday, the chair of the English department. “Over the course of the year the paper really, I think, has improved and become a source of news … that the whole school can be proud of.”

Johnson, Dress and graphic designer/photography editor Britney Pieraldi each said they are proud of their work this semester, especially on the 20-page issue.

“Accomplishing a feat … that you wanted really bad and that you never thought you could get to, it feels awesome,” Dress said.