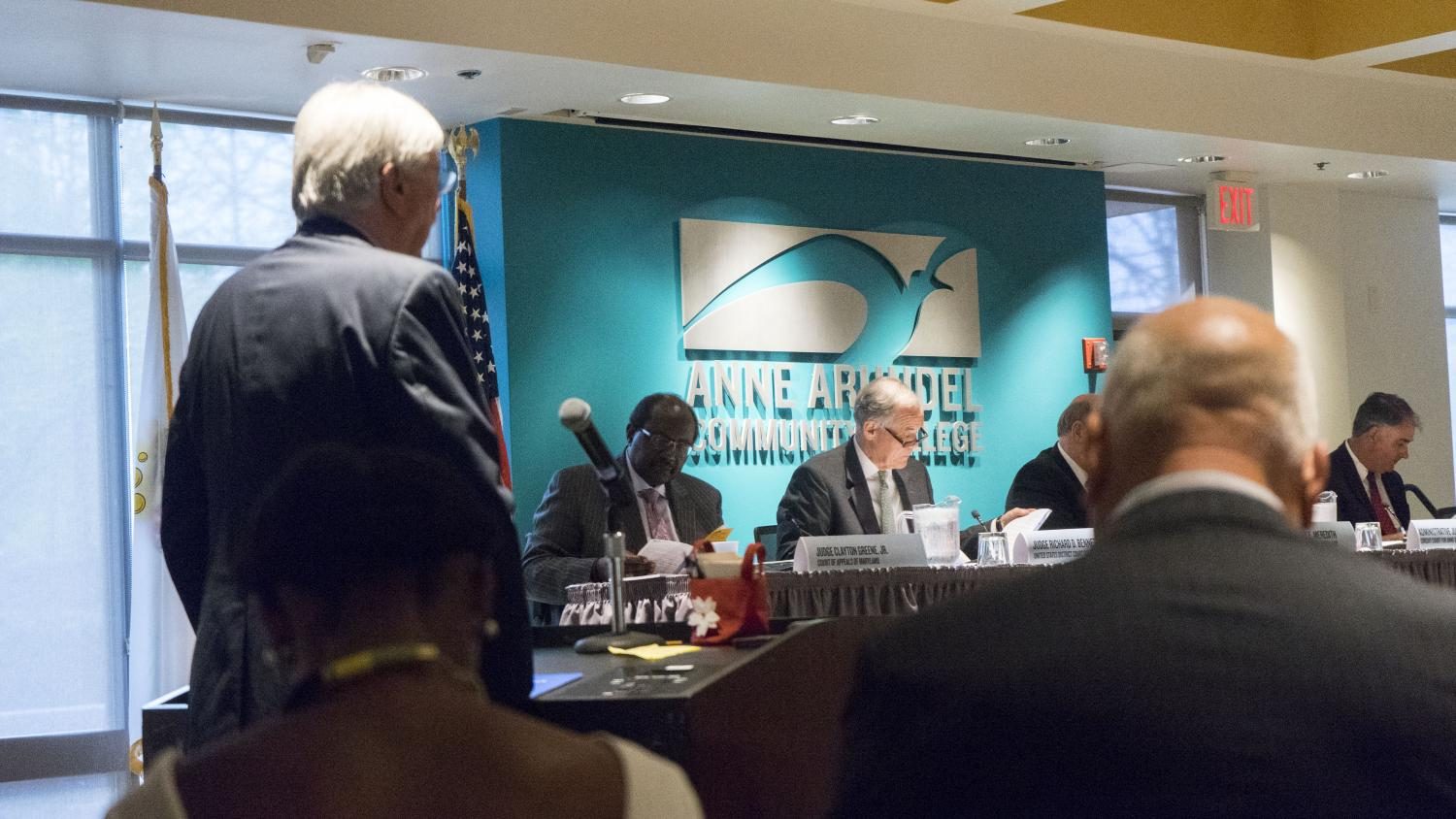 A Maryland Court of Appeals judge said it could be “unconstitutional” to ban anyone from accessing social media, even sex offenders.
Judge Clayton Greene was one of six judges who spoke on campus at an annual Anne Arundel Community College Forum on the Judiciary on April 20. The Legal Studies Institute, an AACC department, hosted the event.

“If you’re going to hold people guilty of criminal conduct, then they have to do something that is criminal,” Greene said about a U.S. Supreme Court case involving a 2008 North Carolina’s law that forbids registered sex offenders from using social media.

But Laura Kiessling, a Circuit Court administrative judge, countered Greene’s argument. She said predators use social media to find victims, and that it can be alarming to parents if sex offenders have access to social media.

Professor Michael O’Rourke, the moderator of the forum, had asked the judges about Packingham v. North Carolina, which is under consideration by the high court.

The judges also discussed Elonis v. United States, and agreed with the U.S. Supreme Court that a Facebook post cannot be deemed a threat if the poster did not intend it as one.

In this case, a Pennsylvania man named Anthony Elonis posted what his estranged wife and others perceived as threatening comments on Facebook in 2010.
For example, Elonis wrote: “Fold up your protective order and put [it] in your pocket. Is it thick enough to stop a bullet?” and “Revenge is a dish that is best served cold with a delicious side of psychological torture” among other rap lyrics.

Elonis had been sentenced to to more than three years in prison, finding that a reasonable person could consider his posts as threats.
But the U.S. Supreme Court reversed the conviction, saying that the posts were not criminal because Elonis did not publish them with “true intent” to carry out a threat.

“The [lower court] jury’s instructions did not require the jury to find that the criminal had a criminal intent,” John Morrissey, the chief judge of the District Court of Maryland, said. “They were looking at it from whether a reasonable person would be upset when they saw that on Facebook. … The focus was wrong, basically.”

Also at the forum, Court of Special Appeals Judge Timothy Meredith said it is illegal for police to track cell phone serial numbers when they are attempting to catch criminals.

“That is an invasion of the privacy of people who have all these cell phones in their purses or their pockets,” he said. “The use of a [mobile phone tracking] device is an intrusion to privacy and requires a warrant.”

O’Rourke, who noted more than 100 students and community members attended the forum, said he believes AACC is the only college that invites judges to participate in a legal forum for students.

“[It was] a very entertaining and educational evening,” he said after the event. “Most of the students we talked with after the event [said] it was a whole lot more enjoyable than they thought it would be.”

Francheska Salazar, a paralegal major who introduced the judges, said the topics were interesting and informative, especially when concerning technology and the law.

“I definitely find it interesting the way the technology keeps increasing and the way the law has to keep up,” Salazar said.
Greene, who also participated in the forum two years ago, said the event is important for college students.

“All citizens need to know about the law,” Greene said. “[And] the court in the past has been a mystery. One of the things we try to do is demystify what we do.”
Greene added that the forum helps to bring more awareness that judges are “human beings” too, and it also provides more insight into how courts work.