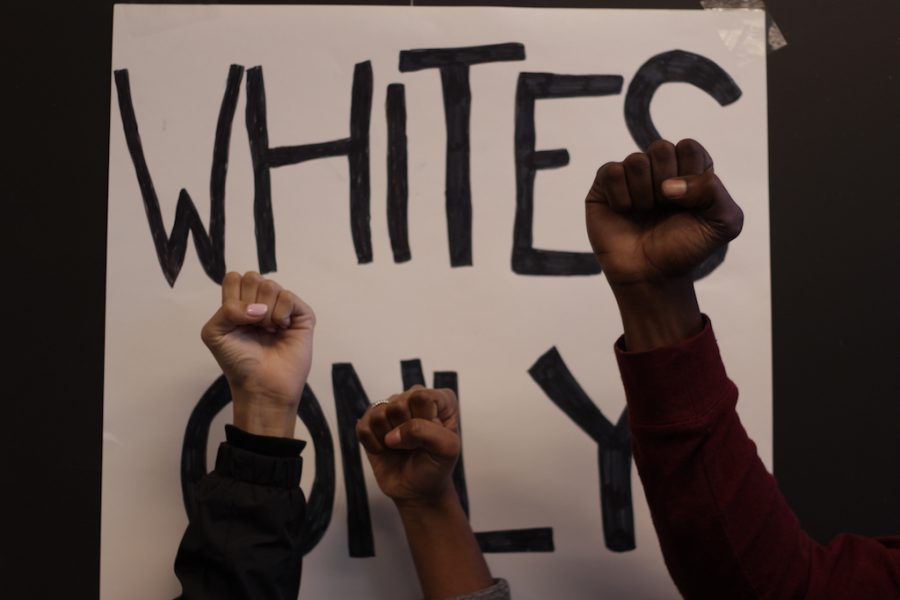 AACC students gather for a historical re-enactment as part of Black History Month on Feb. 20.

The month kicked off on Feb. 1, with a soul food luncheon, attended mostly by campus staff, that sparked discussions about race in the workplace.

The following week, local historian and genealogist Elinor Thompson told a campus audience that everyone in Anne Arundel County is related in some way.

Thompson said some in the Anne Arundel community have rejected her claims that “we are all related.”

During the month, the Truxal Library had a selection of documents highlighting black history in Anne Arundel County, with emphasis on Thompson’s works.

And a two-week “Race Card Project” was displayed on walls in CALT, Careers Center and the Dining Hall.

The project, produced by Dr. Gina Finelli, a sociology professor at AACC, allowed students to write down six words on notecards about how they feel about race.

Activist Monti Washington also spoke at AACC during Black History Month. He emphasized the importance of listening to each other to gain equality in this day and age.

“I do believe all lives matter, absolutely,” Washington said at the speech, titled “Which Lives Matter?” “But I do not believe all lives are treated with the same amount of importance and significance. You can just turn on the news and see that for yourself.”

On Feb. 17, the Singing and Praying Band of Maryland and Delaware came to AACC for a performance.

The event began with a song, followed by a prayer. The band taught the audience about the fundamentals of religious values and traditions.

The next week, students engaged in a historical re-enactment, which was reminiscent of the 1960s counter-protest sit-ins that African-Americans participated in as part of the civil rights movement.

Three events came on Feb. 23. First, AACC showed “Rosewood,” a film about a lynch-mob attack on the African-American community in 1923.

After the film, activists discussed a legislative proposal that aims to establish a commission to study the impact of slavery and racial discrimination.

Pinkett spoke to AACC students about merging their passions with talents to achieve excellence in their careers and life.