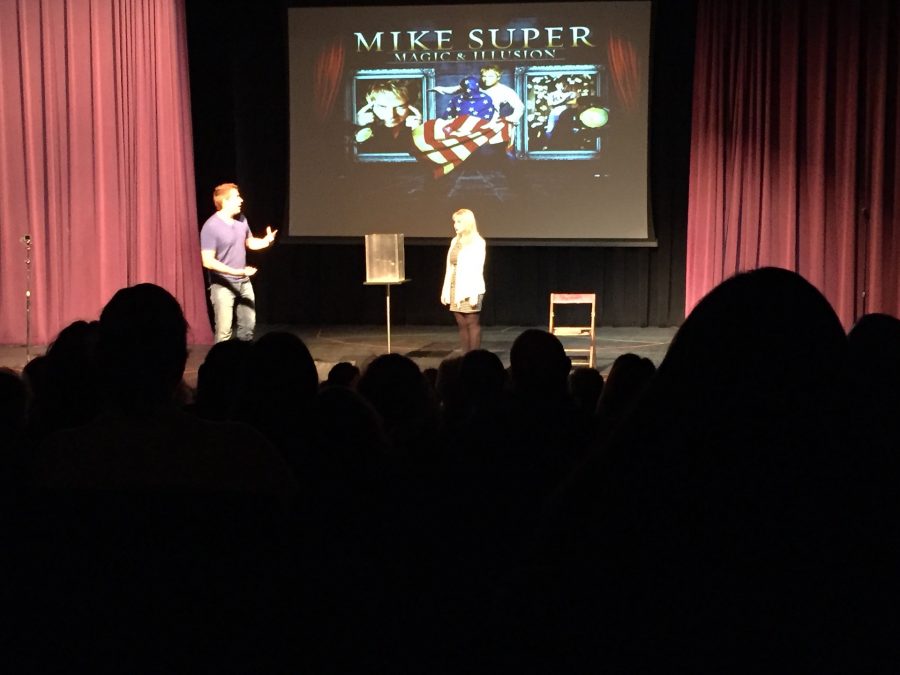 Campus Activities Board brought an “America’s Got Talent” finalist magician to AACC on Feb. 24.

The magician Mike Super’s first trick was having someone from the audience crush an empty coke can, which he then straightened out–without touching it–with the motion of his fingers.

For his next trick, which he said involved time travel, Super left the stage and came back a few seconds later, claiming he met an older version of someone from the audience at a party in the future, who gave him a box to hold on to.

He gave an audience member the box and had a second student, graphic design major Rachael Keel, come on stage.

Super said he met Keel in the future. While she was on stage–in the present–he had her place her phone in a bag and swing it around. Next, she opened the bag and the phone was missing. Super then had the first audience member open the box–revealing Keel’s cell phone.

Keel then looked at her phone and read that the date on the phone was her birthday, Feb. 16. She said she never told Super her birthday.

“The tricks surprised me in many ways,” Keel said.”I couldn’t figure them out; which I think are the best kinds.”

Super continued the night with various other tricks, such as solving a Rubik’s Cube in 25 seconds. He also taught a little girl how to make a piece of paper float in the air.

Emily Dreszer, a third-year transfer studies major, said her “favorite [trick] was the breaking of glass and seeing audience members react to his different tricks.”

The last trick Super dedicated to his mom because, he said, she was his biggest supporter.

When he was younger, Super promised his mom that he would make it snow because that was her favorite thing on Earth. His trick back then was taking a piece of paper and tearing it up into little pieces.

Unfortunately, he said, his mom was never able to see him perform in front of an audience. So during the show, he ended up turning one paper into a bunch of tiny pieces, making it “snow.”

More than 80 people attended the event, mostly families and kids.

Super was also a winner of NBC’s show “Phenomenon” and a winner of numerous awards, including Campus Entertainer of the Year.