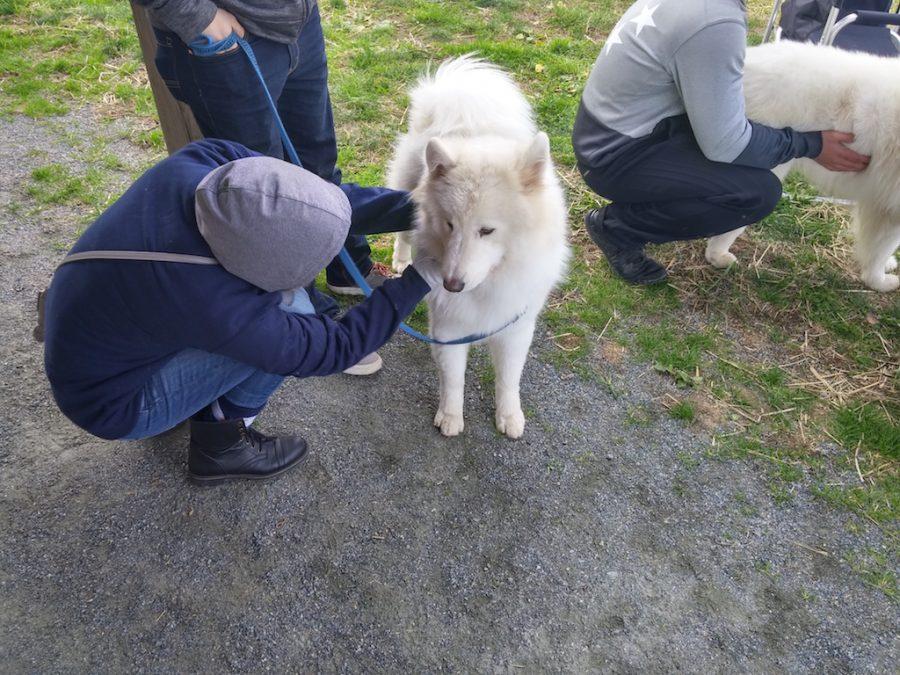 Musher Mary Wolf tends to a sled dog at a dog-sledding practice that AACC students attended.

Mary Wolf crossed the finish line loudly, her bike pulled by three white, fluffy Samoyeds: Cowder, Taki and Ambrosia. Her fourth sled dog, a retired Samoyed named Sarah, barked and chased after her and her four-legged team. Wolf climbed off her bike and congratulated the dogs on their effort.

As Wolf and other mushers practiced for an upcoming race in Elkton, Maryland, on Dec. 4, nine AACC students from Dr. Matt Yeazel’s Sports in America class cheered the team on.

At the mock race, students listened to a talk by Pennsylvania Sled Dog Club President Johnn Molberg, who was a professional musher for 40 years.

Molberg explained that the mushers were doing time trials at Fair Hill Natural Resource Management Area to prepare for a race the following weekend on the same track.

“This is called dryland racing,” Molberg said. “For the United States, we’ve been out training on wheels forever. It’s something they did extensively in Europe. When we saw that they were doing it there and not getting killed or hurting their dogs, [we followed suit].”

Molberg said Siberian Huskies are a favorite breed among mushers.

Wolf said the sport attracts all kinds of participants.

“One of the good things about mushing is that it’s not [a male or female sport], it’s a dog musher sport,” Wolf said. “It doesn’t matter if you’re a boy or a girl; it’s all about the dogs. It’s amazing.”

Yeazel gave his reasoning behind taking his students on the trip.

“A critical piece for us is to critically examine all sorts of different kinds of things in a Sports in America class,” Yeazel said. “That does not necessarily mean we focus on your baseball, basketball, football, etc., but other, broader sports that are part of the American landscape.”
Students said they enjoyed the trip.

“I learned there is no ideal number for what size team you want,” student Dani Florio said. “Like, Mary has four dogs, but only uses three.”

Others said the trip was a learning opportunity.

“I realized there’s this whole other world of sports I didn’t even know about,” Harrison Wolf, a sophomore landscape architecture major, said. “I knew there were dog sled races. I didn’t know there were meetings going on this close to where I live.”

Yeazel said he plans on making the trip a recurring option for future classes.