On campus you’re bound to find your sense of self, personality 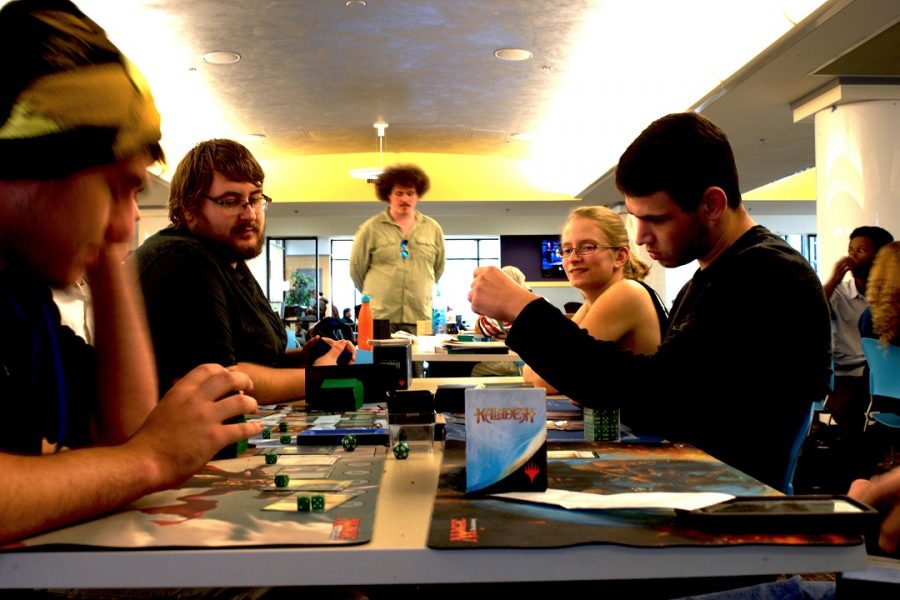 Students gather with friends in the Student Union building to play the fantasy-inspired card game, Magic: The Gathering.

We all went through high school with people who may have been a little out of the ordinary with their approach to being social. They may have sat at a different lunch table, worn different clothes, shown their love for things that were out of the mainstream; the list can go on. But with those differences comes the separation into cliques. After you move on from high school, the cliques seem to vanish, as does the mentality that being “cool” actually means something.

We at Campus Current believe the years you spend at a college are a testament to finding who you really are. As you walk around our campus, you’ll find people engaging in activities that might be deemed socially awkward, but that doesn’t matter. We take exception to the glances filled with malice and to speaking ill of those who do not conform to your view of the world.

Now that you’re out of high school and more on your own, maybe you’ve noticed that your social status does not mean anything to anyone but yourself. So you can step out of your social bubble and go shape who you will be for the rest of your life.

Originality is key to impressing the people around you, right? Some people would rather take the easy way out and latch onto others’ ideas and claim them as their own, such as how you present yourself or your speech. Others, however, embrace their originality and individuality. We like that.

If your style is a little off the beaten path, we say: Own it. If you would like to wear a dress with tennis shoes, or socks with sandals, own it. If the way you say a phrase or a joke is funny, own it. Own everything about yourself, even the parts you perceive badly. That’s one of the easiest ways to become a well-rounded person.

Own whatever unique characteristic you possess. We absolutely cannot stress this enough. It may look wrong to people who don’t understand your own way of thinking, but it doesn’t take away from who you really are, or who you’re trying to be in life.

You will encounter those sideways glances in every stage of life from those who only see things from the narrow road they walk. What matters is that you trek through those crossroads as you reach your destinations in life.