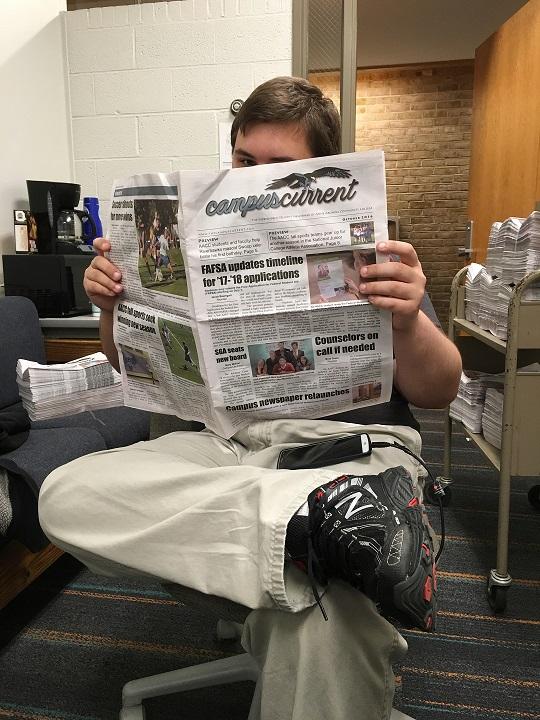 Editor Cody Colston reads the first print edition of the Campus Current in over a year.

The Campus Current is back. Those words are as sweet as drinking iced tea on a hot summer day, after a long day of work in the sun. What can I say? I’m a sucker for poetic imagery.

When I joined the paper over a year ago as a reporter, the Current had lost its longtime adviser, its long time editor, and its longtime advertising manager. We managed that semester and printed two editions. They weren’t the greatest editions, but given the circumstances it was a win for us.

Then, everyone left. I was one of two members left standing. I was then offered the editor position, which I accepted and wore like a badge of honor. I became the proud mayor of a ghost town.

Due to a number of reasons, the Current did not publish anything last semester. I’ve been told many times that I don’t need to, but I take full responsibility for that blunder.  That’s in the past now, but the past exists for a reason; for us to learn from it.

We are re-launching the Current with a new design and outlook. We are a paper for the students. We take news seriously. We strive to be accurate and dependable. We are servants to the student body.

So with this editorial, I want to formally welcome the new and improved Campus Current back. And I’d like to formally re-introduce it to the student body. I hope we become your primary source for campus news and shenanigans.