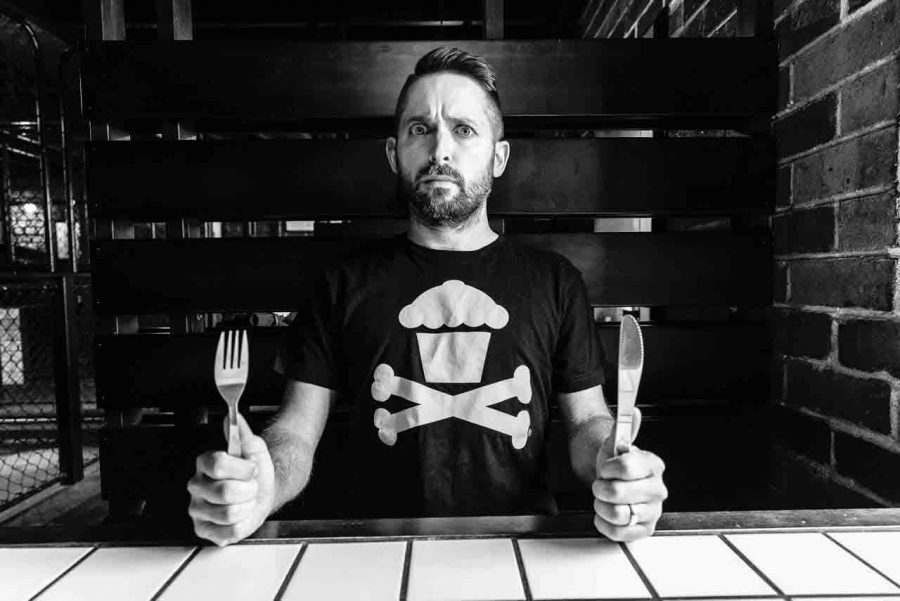 Johnny Earle aka Johnny Cupcakes visits AACC to talk about his success as an entrepreneur. He began his first business at 12 years old.

The secret to running a successful business, says Johnny Earle, aka Johnny Cupcakes, “is making sure you do what you love.”

Earle, an entrepreneur whose business sells T-shirts, visited the campus on Sept. 27 at the invitation of both the Entrepreneurial Studies Institute and the Student Government Association.

“It’s important to make sure you stand out and that you have at least a dozen things that separate you from everyone else,” Earle said in an interview with Campus Current. “From your personality to your packaging to your story, [to] your products, your events.”

Earle said he encourages students to make time for internships, volunteering, and attending lectures and events because it is helpful to interact with other entrepreneurs to learn from their successes and mistakes.

He said he considers the problems associated with starting a business to be puzzles with multiple solutions.

“If you start looking at problems as a puzzle, they start to feel not so bad and you just kind of problem-solve, keep positive and just keep moving forward,” said Earle, who opened a pop-up shop to sell T-shirts in the Kauffman Theater during his visit.

Earle used to work at a record shop, and his co-workers would give him a different nickname each day. One of those nicknames has stuck with him throughout his 15-year career.

“‘Johnny Cupcakes’ came out of nowhere,” Earle said. “I thought it was funny so I put it on a T-shirt to advertise a bakery  that didn’t exist.”

Soon after, Earle started selling t-shirts out of his suitcase while on tour with his band.

Born in Boston, Earle watched his parents spend most of their time working and traveling. That inspired him to become an entrepreneur, as owning a business, he said, would allow him to spend more time with family and less on the road.

He started 16 businesses before age 16, performing magic acts and opening a lemonade stand.

The Johnny Cupcakes brand gives back to the community by sponsoring sports teams and donating to charities.

Earle speaks and meets with students all over the world to tell them their time and their lives are valuable.