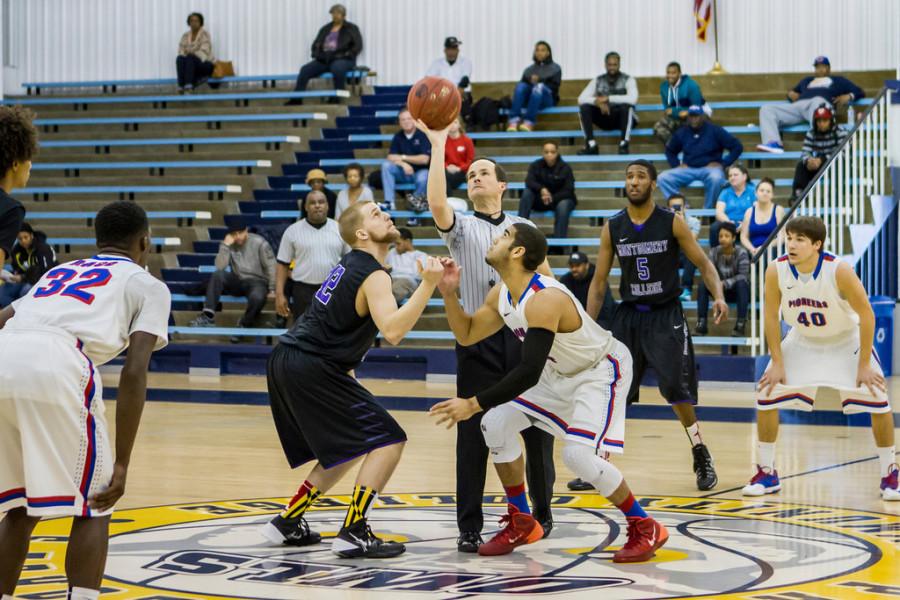 During the 2014-2015 basketball season Calab Smith led the Anne Arundel Community College Men’s Basketball Team with 400 points. He was awarded with First Team All-Region, the Unsung Hero Award, and an All-Star selection. Now, Smith is taking the year off and helping his mother, Pastor Diane Moore, open a church.

Smith lived in Cambridge, Md. during his two-year stay at AACC. He was originally recruited by Salisbury University as a transfer, so his family decided to move. That’s when the trouble began. Salisbury’s Head Coach denied Smith’s request for Sunday practices off so that he could help the church get off the ground and be the church’s drummer. Smith also offered to be redshirted his first year, that was also denied.

“[The Coach] told me that if the church was that important to me, that I don’t belong at Salisbury,” said Smith. “That kind of threw me off with the coach as a person…this wasn’t a random church that I would play for, this is my mother’s.”

Smith and Salisbury’s Head Coach came to the agreement that he should be taken off the roster for the year. If he came back, he would have to go through rookie training camp all over again. He wanted a school that is more sympathetic to his situation and he narrowed it down to Stevenson University and McDaniel College. But he still has to sit out this year.

“[Sitting out] hurts pretty bad,” said Smith. “Because with me being so successful last year at Anne Arundel, I wanted to set an example. No one else on the team got a look from anywhere.”

Head Coach Tom Smith and Assistant Coach Joe Snowden are both father figures to Smith. Not only helping him grow as a player but also as a person and student at AACC.

“They put the more important things of life before basketball,” said Smith.

Both coaches remain in constant contact with Smith, keeping up with his life and church. They both even offered to be there at the grand opening of the church.

However, no relationship is stronger than the one between Smith and his mother. With his father never taking a part in his life, Smith’s mother has to play every role. “My mom has been a mom, a dad, a brother, a sister, a best friend, a homeboy, she’s been everything.” Smith said.

Smith doesn’t plan on looking back at AACC as just another stepping stone. He’s asked Coach Smith to be a guest speaker for next year’s team.

“[Anne Arundel has] made me a better student, it has made me stronger as far as making my decisions or when I’m under pressure,” said Smith. “That’s why I want to give back to Anne Arundel so much.”

The church, The Temple of Deliverance, opens December 12th.