Playing to the Competition 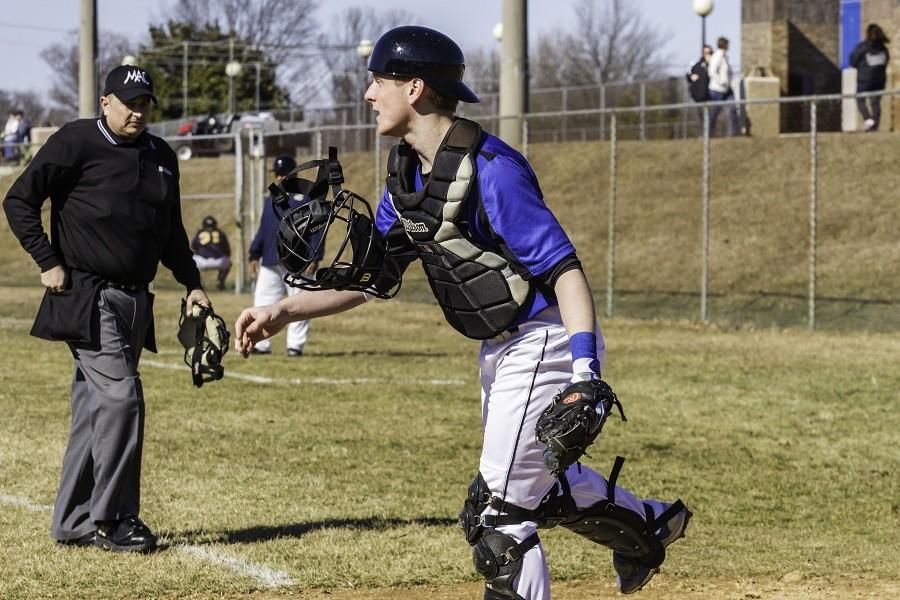 Catcher Kyle Brandt during a game against the Prince George’s Community College “Owls.

The AACC Pioneers picked up their sixth win of the season against the Prince George’s Community College Owls on Tuesday with an 8-5 victory.

Third basemen Michael Takovich (Fr.) led the charge for the Pioneers offense, picking up a double along with two singles while driving in a run. Catcher Kyle Brandt (Fr.) also had a productive day at the plate with a pair of hits and an RBI (run batted in).

While the Pioneers got off to a good start with a run in both the first and second innings, the momentum of the game really seemed to take a swing in the fourth as AACC put together a four run inning.

“We’ve started out slow a lot this season,” said outfielder Corey Powell (Fr.) after the game. “Our offense always seems to pick up a little later in games.”

While it may have come late, the mid-game out pour was the difference maker for the Pioneers. After a botched double-play attempt loaded the bases, center fielder and leadoff hitter Broderick Raimondo (Fr.) picked an RBI on a fielder’s choice. This was followed up by back-to-back RBI singles by Takovich and left fielder Jacob Donaldson (Fr.). The fourth run of the inning was added with a sacrifice fly from first basemen Jonathon Heiser (Fr.), who entered the game as a pinch hitter.

The Pioneers were also the beneficiaries of good starting pitching from Aaron Pilkerton (Fr.). In his four innings of work, Pilkerton held the Owls to two runs on five hits while picking up five strikeouts.

Pilkerton was replaced by relief pitcher Tom Dyson (So.) in the fifth inning. After giving up a leadoff single to the first batter he faced, Dyson bounced back by striking out the next three Owls.

Dyson also showed some grit in his second inning of work. After the bases were loaded, Dyson was able to work his way out of the inning without surrendering a run and stranding all three base runners.

While the Owls were able to add a run in the sixth along with two more in the seventh, the Pioneers’ eight runs were enough to survive the late surge.

“If it’s a team we know we can beat,” said Powell on the District D matchup, “we play to their competition.”