Where Are They Headed: John Matthew Brandon II 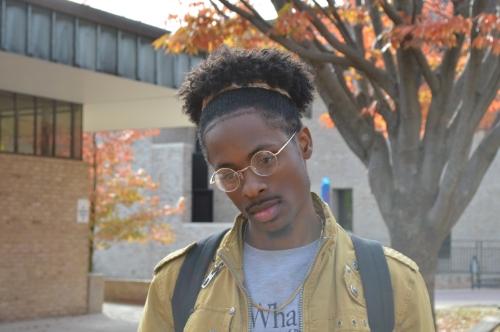 : John likes to cover songs by Frank Ocean and is also a member of the school’s literary magazine, Amaranth.

Q: Why those two colleges?
A: I want to stay close…I’m involved in a lot of things right now. Church and clubs.

Q: What clubs are you a part of?
A: The Campus Activities Board, the Student Association and a writing club. The writing club is, mainly, we go to a different friend’s house.

Q: Are you going to be a writer or what are you going to do with a creative writing
major?
A: That’s a good question. A lot of people ask me that and I don’t know a hundred percent for sure. I just know that my priority isn’t money. It’s not about the money. It’s about what I’m satisfied in doing. What I’m happy with. The arts are what I am
happy in. I’m also interested in journalism.

Q: What medium of creative writing do you like?
A: Poetry is probably my favorite. I also like science fiction, though. I pretty much like all genres except most romance because it just puts me to sleep. Unless it’s actually something really unique. But poetry mainly.

Q: Who are your top 5 favorite poets?
A: Allen Ginsberg, Ishmael Reed, T.S. Elliott…I can give you some that I definitely do not like…because I can’t think of the other two right now.

Q: Okay…who are two poets you don’t like?
A: Shakespeare, Edgar Allen Poe.

Q: Have you traveled anywhere lately?
A: I went on a missions trip. I went to Belize in Central or South America. We woke up one day and there was a dead scorpion next to a girl. So all ten of us [other travelers] beat it with a pillow. We had to make sure that it was dead.

Q: Any other places?
A: I most recently traveled to New York.

Q: What for?
A: I attended Afropunk.

Q: What is Afropunk?

A: It is pretty much a festival celebrating African American art things like that, [art] and music. Not just African American but a specific niche of African Americans. AfroAmerican people who see themselves as punks. Not like, ‘Oh, you’re a punk’ but like, alternative culture. It’s really cool. Great ambiance and you get to see a lot of different people and styles.

Q: Who did you see perform at Afropunk?
A: Tecla, Lianne La Havas, and a whole bunch of artists that I had never really heard of before that I was really intrigued by. I wasn’t as much into the music as I was into the fashion and the culture of it. I just love when people step outside of their stereotypical boundaries of not only their race but just who people expect you to be. That was really cool.

Q: How do you think AACC is prepping you for the future?
A: I love the classes I am in. Their curriculum is great and they’re teaching me things that are going to help me or at least come up again as I continue.

Q: Are there any professors that stand out to you?
A: Professor Hurd. I am taking his Modern American Poetry class and analyzing different poems and getting a new perspective on some that I’ve even read before, it’s amazing to me.

Q: What poems?
A: Like “Howl” for instance, it’s one of my favorite poems that is by Allen Ginsberg. I thought I understood it before, and I understood part of it, but [I liked] how he kind of broke it down to the class interactively. He didn’t just sit there for an hour and just talk, talk, talk, he kind of asked questions, saw everything we understood, and then added to that. I really liked that.

Q: Where do you see yourself in 5 years?
A: I see myself with a Bachelors in either Creative Writing or English or something similar. I see myself actively using that degree and making my name known in the art world, I guess. I don’t necessarily want to be famous, but I want to have my voice
be out there.