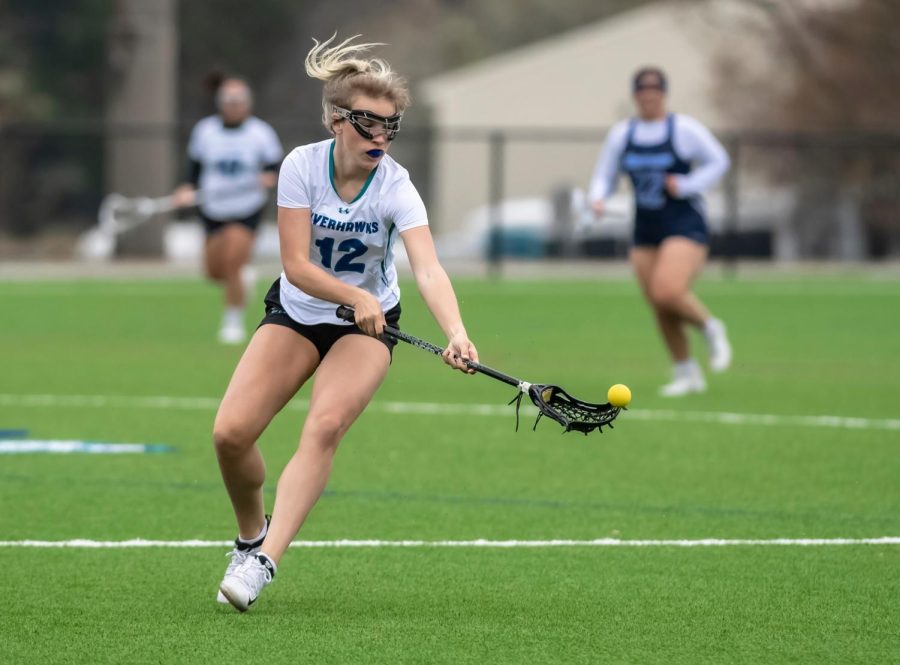 “I [had] fun [this season],” second-year psychology student Dylan Anderson, a defender, said. “I love the guys that I played with. I wouldn’t be out here if I didn’t really care about all the people that I met [and] I valued the relationships that I made while on the team.”

Women’s lacrosse ended their season on May 7 with an 18-6 loss in the National Junior College Athletic Association Mid-Atlantic District championship game. Head coach Jim Griffiths said his players’ strength was a good attitude and their weakness was a lack of experience.

“When you have nobody that’s played a college lacrosse game, except for one person, that’s going to be a weakness at times,” Griffiths said.

Twelve players played for the Riverhawks this year.

Midfielder Madison Hobbs scored 26 goals and tallied 21 assists this season. She led the team with 47 points.

She said her favorite moment was when the team beat Harford Community College, which is located in Bel Air, twice in the regular season.

The win “was a big accomplishment for us [as it] rained for a while,” Hobbs, a first-year nursing student, said. “And then we had to wait an hour before we got to play but it turned out in our favor.”

Riverhawks softball ended the season on May 13 with a 8-0 loss to Chesapeake College in the Region 20 Divison II double elimination round.

Head coach Guy Klingensmith said the team “played extremely well together as a group. Our batting averages from last year went up [and] and our ability to play well defensively [was] great.”

Alyessa Smith, who plays outfield, led the team with a .509 batting average –the highest on the team– and also hit six home runs, which was first on the Riverhawks.

The Riverhawks lost in the Region 20 Semifinals 13-5 on April 29 to Harford.

“The offense did a good job at creating opportunities and getting open for shots,” Anderson said. “But we just needed more of them to go in.”

Ben Wilson, an attack, led the team with 35 goals this season and tallied 41 points, leading the Riverhawks. The team had 29 players this year.

Anderson noted the team could improve on penalties and turnovers for next year.

The golf team will compete on May 22-23 in the Region 20 DIII tournament in Apollo, Pennsylvania.

“There was something everyone did better at the end of the season than they did at the beginning,” O’Donnell noted.

Seven players were on the roster.

Second-year transfer studies student Dylan Weiss said the way to take this year’s success into the next is “to keep a positive mindset.”

“Just keep on going,” Weiss said. “My teammates have a lot of potential. I see potential in each and every one of them. And I know what they’re capable of doing. And I want them to perform as best as they can.”

Head coach Nick Hoffner said this season was a “rebuilding year” because of his young squad.

“I’m expecting this team to take that next step next year,” Hoffner said. “I think we’re going to be in a good position next year to really turn the corner here and put a super competitive team out there on the field.”

Andrew Leginze, who plays the infield and pitches, led the team in batting average this season at .299. He also led the Riverhawks with 43 hits.