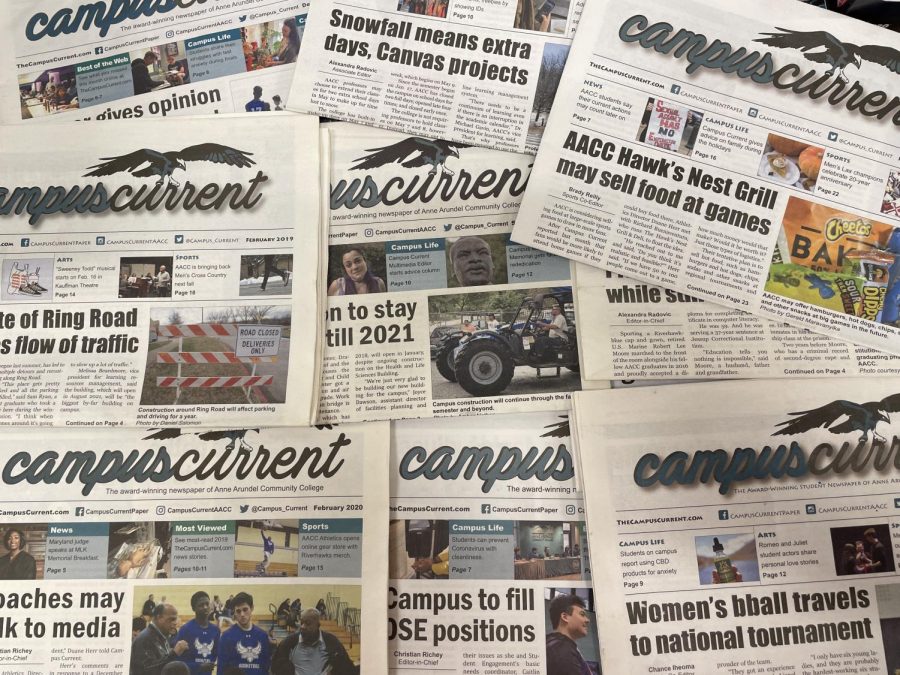 The staff of AACC’s student newspaper revived the print edition of the award- winning paper on Jan. 24.

Campus Current stopped publishing the monthly print edition in March 2020 when the college closed because of the pandemic. Since then, the student editors have published a daily digital edition of the paper and a weekly newsletter.

“There was no point in publishing a printed newspaper on campus f no students were around to pick it up,” Sharon O’Malley, Campus Current’s faculty adviser, said. “I’m so glad it’s time to bring it back.”

The first print edition in 22 months has a new editor, first-year communications student Dan Elson (see related story on Page 6). And the newspaper’s staff of student journalists is waiting to move into a new newsroom in the Humanities building.

Elson said many students do not know Campus Current has an online edition, so they don’t get information about the campus.

“It’s essential that people will read the newspaper because they may not know about the online” edition, Elson said.

“When it comes to viewing things, it’s a lot easier for me to view it when it’s physically in my hands, and I’ll be more inclined to read it, too,” Harris, a first-year transfer studies student, said.

AACC graduate Christian Richey was the editor-in-chief of Campus Current in 2020 when the print edition stopped.

“I think there’s something about being able to see the news for it to be tangible, for it to be just right in your face,” Richey, a senior at The New School in New York, said. “When students see that newspaper on the news rack, I think that really interests them. It really makes them want to go … get it.”
O’Malley pointed to another benefit of having a printed version of the student newspaper.

“There are so many skills that you can learn working on a print newspaper that you don’t learn working on a digital newspaper,” O’Malley said. “In a digital newspaper, you might do your reporting and your writing, but you don’t necessarily do production. You don’t get the teamwork. You don’t get the experience in leadership and persistence that you do during late nights putting the paper to bed.”