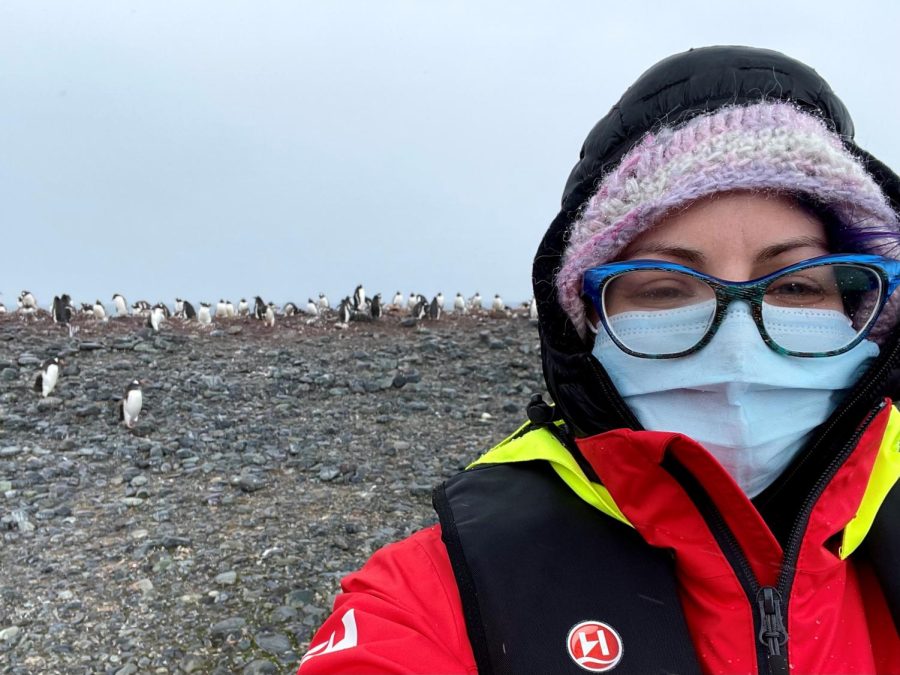 Electrical engineering student Elise Porcelli, the co-president of the Super Science Club, poses with a colony of penguins while on a trip to Antarctica.

Four AACC science clubs have merged into one student organization.

The Super Science Club includes once stand-alone groups that focus on earth science, biology and environmental science, astronomy and chemistry, according to Elise Porcelli, an electrical engineering student and the club’s co-president.

“We’re sort of the black hole for all science clubs,” co-president Grace Bourne, a second-year communications student, said. “Everyone eventually gets sucked in.”

Even before the pandemic, some of the science clubs struggled to maintain membership and started merging, according to Bourne.

“When COVID did hit, it kind of became a bid for survival as clubs,” Bourne said. “Individually, the membership just wasn’t there to keep up.”

“Combining disciplines typically means we can have up to around 30 people in a meeting,” she explained. “In that way, I feel like we probably work far better together as a combined club than we ever did as individual clubs.”

Meetings consist of faculty- and student-led presentations on STEM topics, such as research, history or news.

“I enjoy the variety of just fun geeky stuff that we can cram in 45 minutes,” Porcelli said. “It’s one of my favorite things because everybody’s willing to share.”

Bourne added that anyone who has an interest in science is welcome to join the club, regardless of major.

“You literally don’t have to know anything about science, and it’s OK,” Bourne said. “You can just come and learn in a stress-free environment.”

“This club, in terms of the number of active students and officers, is the best I’ve ever worked with,” physical science professor Anthony Santorelli, lead adviser of the club, said.

The club meets virtually every Tuesday from 3 p.m. to 4 p.m. The first meeting of the spring semester is scheduled for Jan. 25.