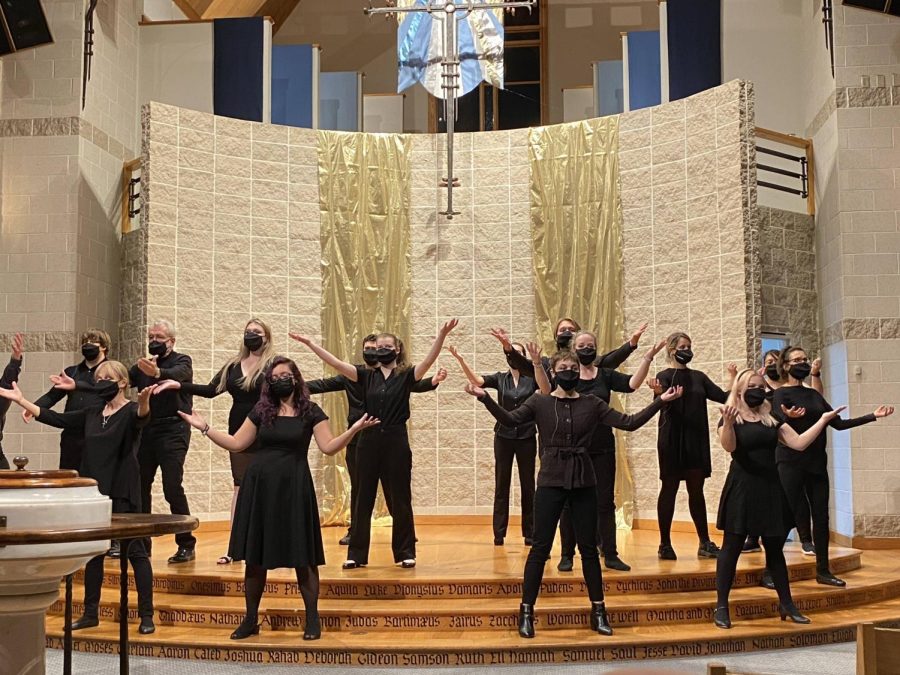 After a year online during the pandemic, some performing arts students were able to come to campus for classes and rehearsals during the fall semester.

In the spring, about 50% of dance, theater and music classes will be on campus, the directors of those programs have said.

And they said they’re hoping to schedule live shows this semester, even if the performers and audience members have to mask up to make them happen.

“One of the things I’ve noticed has just been a general sort of desire from everybody … for getting back into the space, doing it safely,” Sean Urbantke, AACC’s theater coordinator, said. “And getting their hands-on stuff again, and getting in front of an audience again. … For a lot of folks, it is a passion, it’s a release.”

Urbantke said he’s hoping to get his students back in front of an audience this semester with a live performance in the theater.

Likewise, AACC’s new dance coordinator Robert Kleinendorst said he hopes to have a spring dance concert in the Kauffman Theater at the beginning of May.

And music coordinator Doug Byerly said he’s planning a Black History Month performance for the opera company, which he said he hopes will be in person.

Still, a greater challenge than dancing or singing while wearing masks this semester might be recruiting enough students to populate the shows.

“We’re sort of at a skeleton crew,” Urbantke said. “The … other effect, I think, of the pandemic is we’re … running low.”

He said the pandemic led people to spend their money on necessities rather than luxuries like shows.

And many students are foregoing performing arts electives in favor of courses that fulfill general education requirements, he said.

Still, Byerly said he is hopeful that enough students and community members will return to campus to put on a show this semester.

“There are a really healthy number of students who want to continue to sing, to play instruments in orchestra and jazz, to study the visual arts,” Byerly said. “COVID has canceled so many things in our lives that people and students in particular are really interested in continuing to pursue the arts.”

The directors said they are taking precautions so student and community performers can safely participate in classes, rehearsals and public shows.

“AACC is being very proactive in student safety,” Byerly said.

Still, Byerly said, “Anybody who’s done public speaking or singing in church or singing in general knows that it’s almost impossible [for a masked performer] to sing for a long period of time because at a certain point, you just can’t breathe. So, these masks really helped out.”

“One of the things with live performance is the ability to see facial expressions,” Urbantke said.

Theater students last semester did an in-person performance for their friends and families, who signed waivers attesting they did not have COVID symptoms, he said.

The directors agreed that climbing back to pre-pandemic enrollments and regular performances will take work and time.

“We’re getting back into [it] slowly,” Urbantke said. “With every new wave, you know, it throws us new curveballs.”

“Right now, I think we can only continue what we have been doing,” he said. “I feel confident.”