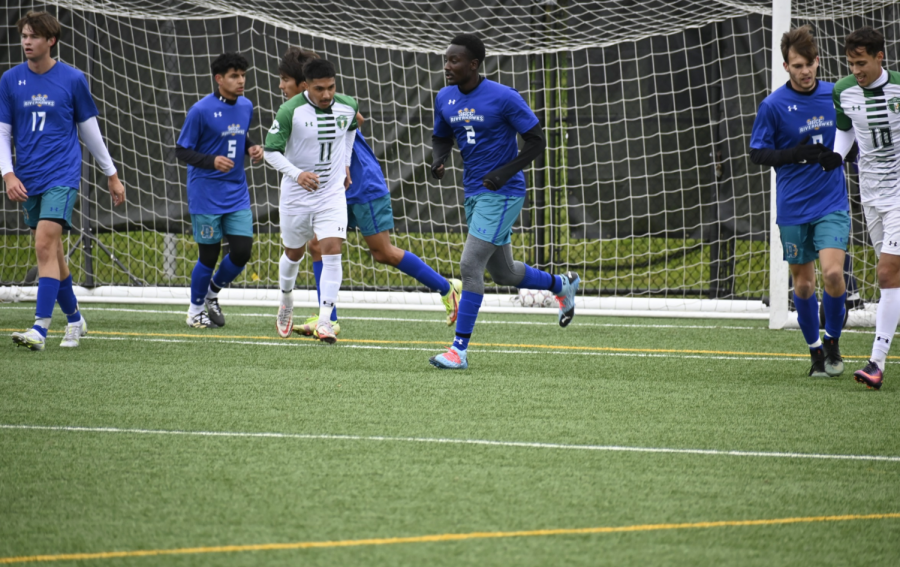 The Riverhawks men's soccer team finished first in its region this season. Shown, No. 2 Charles Warari, center, plays forward on the team.

AACC sports teams wrapped up their fall season with the Riverhawks finishing in first place in their region for men’s soccer and second place for volleyball.

“[This] past season was a lot of fun,” men’s cross country runner Luke Jimenez, a second-year transfer studies student, said. “A lot of hard work with the guys.”

Men’s soccer won eight games and lost six in the regular season, and then lost in the first round of the National Junior College Athletic Association Division III playoff game to Richland College of Dallas. Still, the team made it to nationals for the third time in team history.

“It posed a challenge because we went [into] overtime,” Warari said. “So that was the factor that determined who wanted [to win the game the] most.”

He scored the game-winning goal in overtime.

“We got to qualify for the national tournament,” Cosentino said. “We were the top ones in our region [and] I think what helped us along the way was, we have one of the strongest conferences in the country. We had a great group of guys [and] I think other teams were more talented than us, but I really do think [that] our team chemistry [and] leadership, found ways to win games.”

Women’s soccer competed in a club league, going 4-4-1 in the region this season.

“[I look forward to] meeting the new people that come because I was a new person this year,” Evans said. “It was kind of nerve-racking because you don’t know what to expect.”

Coach Karin Victorio said she is already thinking about next year.

“I am ready for next season,” Victorio said. “I feel ready to do it all over again.”

Men’s cross country ranked 8th out of 18 competitors this year.

Coach Kieth Bigelow said he couldn’t have been more pleased with the team.

“Two months ago, we were still trying to piece together a team,” Bigelow said. “The guys on the team came together as a team. Their hard work [plus] the workouts we did really exceed my expectation, but they exceeded their expectations by placing eighth in the nation out of 18 teams. That’s phenomenal compared to what we accomplished in the past.”

Jimenez said the team placed eighth because they were struggling to get players.

“We weren’t going to get No. 1,” Jimenez said. “In the beginning, we were just struggling to get people in general. I think once we got a grasp [of] where we were with all of our dudes, we started the hard work because we finally had everybody together properly trained.”

Women’s cross country placed 8th out of 11 competing teams in the region.

“It was a very fun season, a lot more fun than I anticipated,” runner Madison Palmer, a second- year transfer studies student, said.

“No one was injured,” Noble said. “We pulled back when people started [with] some injuries, a little aching.You know, when you’re a runner [and] if you start to feel something, you have a choice. You can take off two days, two weeks or two months. So anytime anybody had a little something going on, we pulled back. You want to peak at the right time and we did.”

Coach Tanecha Rice said the season was a success.

Setter Megan Helinski, a first-year biology student, said not having a lot of people on the nine- player team was a challenge.

“We never really got a break,” Helinski said. “We had a lot of injuries happen. … Some people fought through pain [and we needed] enough people to continue and it was hard because some people would not have the best game and we couldn’t really take them out or anything.”