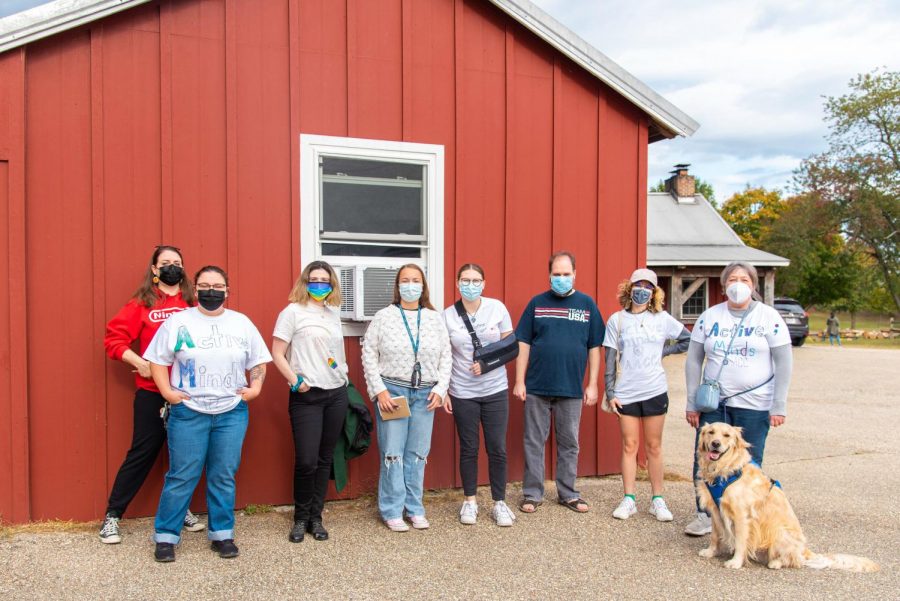 Members and faculty advisers of Active Minds pose at a barn at Kinder Farm Park during a student club event.

Six members and the faculty co-advisers of the Active Minds at AACC club gathered to speak to one another about mental health awareness while they observed the farm animals at the park.

Co-adviser Juli Hawk, an adjunct psychology professor, described the event as “our version of the ‘Out of the Darkness Walk,’ which is a nationwide event that is done with the American Foundation for Suicide Prevention.”

Before the pandemic, the club would travel to the annual AFSP event, held at the Navy-Marine Corps Memorial Stadium in Annapolis, to walk alongside thousands of other participants.

This year and last, the club’s advisers decided it would be safer to host an AACC-only event at Kinder Farm Park. Wearing masks, social distancing and completing the AACC student vaccine certification form were requirements to attend the event.

Aimee DeRenzo, a third-year psychology student and co-president of Active Minds, attended the walk this year and last.

“I had my final today, so I wanted something that I knew was going to be stress-free, or at least stress-reducing for me,” DeRenzo explained. “Last year, this was one of the best outdoor activities we did because you have the animals, the park. It’s just a great environment.”

Co-adviser Denise Portis, an adjunct psychology professor, said the event served to “help people learn to talk about mental health like they do other kinds of health problems.”

While some meetings are recreational, such as the club’s Oct. 19 viewing of “Hocus Pocus” on the Arnold campus Quad, others focus on mental health education.

DeRenzo said she enjoys being a member of Active Minds because “I love having a support group of people who, if they’re not dealing with similar things as you, they at least know about it. If you’re going through a rough day, or you’re just having a really bad week, it’s a group that you can express that to.”

Emily Newcomb, a psychology student and co-president of Active Minds, said she is already looking forward to next year’s event at Kinder Farm Park.

“Even if I’m not in the co-president position, even if I’m not still at [AACC], I will definitely keep up with the club and just come join everybody next year,” Newcomb said.